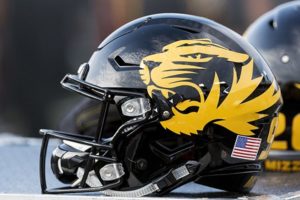 Mr. Drinkwitz is coming off an impressive 2019 season at Appalachian State, where he led the 20th ranked Mountaineers to a 12-1 record and a Sun Belt Conference Championship. Mr. Drinkwitz will receive $24 million over the six years of his new contract.

“We invest in excellence,” said Mun Choi, president of the University of Missouri System. “This is not just about investing in athletics excellence; this is about investing in excellence for this university and the entire state. I’m also very appreciative of (athletic director) Jim Sterk’s leadership throughout this process.  He has our full support as we are very excited about the future of the MU athletic program.”

“I can’t wait for every Tiger to meet Eli, he’s a special guy who has a magnetic personality that people will appreciate and enjoy,” said Mr. Sterk. “I’m thrilled to have him here at Mizzou leading our program, he’s got passion, a plan and a vision that will take this program to great heights. We went on a search looking for the right coach at a crucial time, and we found him.”

Mr. Drinkwitz becomes the 33rd head football coach in the University of Missouri’s history. His offensive prowess has been a key element in his teams winning five conference championships while compiling an 8-0 bowl game record in 10 seasons at the FBS level.  The combined record of his teams from 2010-19 is 98-34 overall (74.2 percent), including a 57-22 conference mark (72.2 percent).

In 2019, Mr. Drinkwitz turned in an impressive FBS head coaching debut. Appalachian State set a Sun Belt record with its 12 wins, and also set the mark for the best regular season in conference history (11-1). The team claimed the Sun Belt championship with a 45-38 win against Louisiana on Dec. 7. Prior to Appalachian State, Mr. Drinkwitz spent three years as offensive coordinator and quarterbacks coach for North Carolina State, after holding a similar role for two years at Boise State, where the Broncos won the Mountain West title in 2014. Before that, Mr. Drinkwitz was running backs coach and co-offensive coordinator at Arkansas State, which won back-to-back Sun Belt championships in 2012-13.

“I’m excited for the opportunity of a lifetime to be the head football coach at Missouri,” said Mr. Drinkwitz. “This is a special place with special people. I know this is the Show-Me State, and I’m fired up to show this state what our football program is going to be all about.”

“It was an honor to be entrusted with the search for the new leader of one of the iconic brands and one for the top college football jobs in the country,” said Mr. Sugiyama. “Mike Norvell is one of the rising stars in college football not only for his overall body of work…an overall record of 38-15, three consecutive appearances in the conference championship game and a winning percentage of 71.7 percent. But he also had his best year the year our job was open…winning 12 games culminating in the 2019 AAC Championship.”

Search firm president, Laurie Wilder is responsible for the strategic leadership and day-to-day operations of the firm. She has been with Parker for 19 years and is responsible for leading the development and delivery of recruiting strategies and best practices across the firm’s practice areas. She is involved in all aspects of the search process and has conducted over 1,000 leadership searches. Her experience spans across AAU public research universities, regional and state colleges, as well as private liberal arts institutions. She has recruited for leadership positions across all levels of higher education and collegiate athletics. Ms. Wilder has also actively worked on middle- and senior-level searches for a variety of corporate clients in the sales, marketing, material management, logistics, human resources, general management, operations, manufacturing, construction, and finance functions.