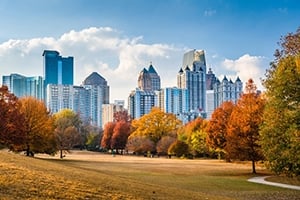 October 26, 2018 – Executive search firm Odgers Berndtson has opened a new office in Atlanta with the additions of Mats-Ola Bydell and Christopher Grahn.

“Atlanta is home to some of the world’s most famous and innovative companies,” said Odgers’ CEO Steve Potter. “And its talent pool is accordingly vast. We expect Atlanta to be a big part of our future business, and look forward to being part of the community.”

The Atlanta office will be led by Mr. Bydell, who joins Odgers Berndtson as a partner in the industrial practice. He specializes in board and senior executive succession for both large and mid-cap global companies, and has extensive experience providing executive search and talent solutions to North American and global European-headquartered clients. His geographically wide experience allows him to add value in both a search and an advisory capacity to clients engaging in talent decisions at a local, regional or global level, said the search firm.

Mr. Bydell comes to Odgers from Korn Ferry, where for 10 years he was a senior client partner in its global industrial market. Previously, he spent 14 years with a global recruitment and assessment firm, where he was an executive vice president, international business and operating president of the firm’s consulting group. He was responsible for establishing business in China and India, and served on the boards of the company’s offices in China, India, Belgium and Germany

“Mats-Ola is a heavy hitter,” said Mr. Potter. “He’s got more than 20 years of search experience, he knows the global industrial market like the back of his hand and he’s a fabulous leader. I am delighted to have him in charge of the firm’s Atlanta presence.”

Mr. Grahn joins Odgers Berndtson’s industrial and technology practices. He has over 15 years of experience as a CEO, president and director at technology companies in North America, Asia-Pacific and Europe, plus deep experience in strategy consulting and non-executive board member recruiting. Mr. Grahn is advising several Nordic growth companies in the U.S., primarily in renewable energy and technology enabled services. He was previously senior adviser and vice president for strategic partnerships at Lexplore AB, a Swedish artificial intelligence and eye-tracking company. Prior to that, he was a VP at Ericsson Inc., where he managed Ericsson’s growth with reference to the internet of things.

“Christopher is a longtime industry executive with very strong international experience,” said Mr. Potter. “He’s got deep, first-hand understanding of today’s leadership needs in the industrial world, where technology has a tremendous impact. We’re especially excited about the work he’s done in technology-enabled services and digitization, the internet of things, autonomous driving and artificial intelligence. His addition to the firm significantly enhances our capacity in those spaces in the U.S.”

Odgers Berndtson has seen a wave of growth in recent months. In August, the firm hired Nicole Phillips as a partner in the firm’s retail and consumer practices. Ms. Phillips joins Odgers from DHR International, where she was a partner in the global retail & consumer practices. She recruits across a range of functions with an emphasis on marketing, merchandising and digital.

In May, the firm expanded in western Canada with the appointment of Stephen Diotte to partner and head of leadership services for the western region, as well as the firm’s new Canadian energy sector expert. Mr. Diotte has deep consulting experience in working with leaders globally around talent and organizational strategy and redesign, specifically focused on the energy sector. He was most recently an associate partner at McKinsey & Company in Calgary.