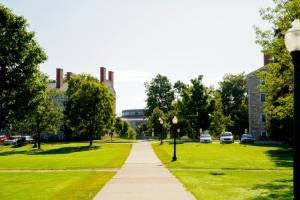 December 6, 2017 – The University of Charleston (UC) in West Virginia has launched a national search for a new president. Edwin Welch, the school’s current president, announced that he will retire effective next June. The school has enlisted the services of executive search firm Myers McRae. David Gring, senior vice president of the Macon, GA-based recruiters, is heading the assignment.

The search committee is seeking applications, nominations and expressions of interest for the next leader to advance the mission of the university.

The president also serves important roles beyond the administration of the university, said Myers McRae. Because the school’s campus is located directly across the river from West Virginia’s state capitol, UC is the host for many community events. The president is expected to be an active leader in the community. Historically, the president also holds a leadership position in the Independent College Enterprise, a consortium that provides computing services for eight colleges in four states and is housed on the UC’s campus, which the new leader is expected to continue.

The next president of the University of Charleston must have a doctorate or evidence of extraordinary intellectual engagement and experiences that demonstrate the ability to lead an institution of higher education, said Myers McRae. The incoming leader must have a record of success in fundraising and ability to promote the university.

Candidates are also expected to be capable of fostering a vibrant and empowered community through a leadership style that evokes trust, welcomes debate and collaboration, reflects confident decision-making, and effectively engages the talents and experiences of the board of trustees, administration, faculty, staff, students and alumni. The search firm stressed that the new leader should have demonstrated knowledge of financial management and business principles.

Myers McRae is an executive search firm serving colleges, universities, independent schools and other not-for-profit institutions. Nearly all of its search professionals have a minimum of 20 years of experience in higher education. The majority of the firm’s searches have been for presidents, chancellors, provosts, vice presidents, deans and other senior academic and administrative leaders. Emily Parker Myers is the firm’s chief executive officer.

Here’s a look at some firms that have recently been tapped to find new leaders for universities culled from the Hunt Scanlon Media archives.

Slippery Rock University in Pennsylvania is the latest highly regarded college to launch a search for a new leader, turning to academic leadership recruiting specialist AGB Search to help find its next president. Executive search consultants JoAnn Gora and Laird Desmond are leading the assignment.

Savannah State University (SSU) is seeking its next provost and vice president of academic affairs. The school has turned to Academic Search to fill the role. Senior consultants Mac A. Stewart and Maya Kirkhope are leading the assignment. The provost, who would assume office by January, reports to the president and is a key partner in academic decision-making.

Seattle University, the American University of Paris and Pace University have all enlisted executive search firm Isaacson, Miller to recruit new provosts. VP and director Julie Filizetti is leading the search for Seattle University along with associates Sheila Bharucha and Nathaniel Brewer.

Quinnipiac University in Hamden, Conn has enlisted Spencer Stuart to find its next president. The incoming leader will be replacing John Lahey, who has held the position for the past 30 years. Bill Weldon, chairman of Quinnipiac’s board of trustees, is heading its presidential search committee

Cleveland State University president Ronald Berkman, who since his arrival in 2009 has transformed what was predominantly a commuter school into a campus with strong partnerships, has announced his retirement. The college has enlisted Wheless Partners to find its next leader.