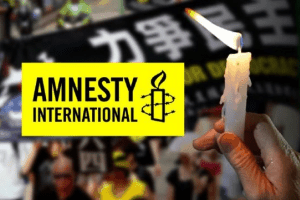 The teams will include AIUSA’s campaigns, public affairs (media, social media, arts and entertainment engagement, and events), advocacy/government relations and the Silicon Valley Initiative. The chief impact officer will also serve as a key liaison with others in Amnesty International, contributing to global campaigns and initiatives. The impact officer will serve on the executive team where he or she will be a thought partner for peers and advise the executive director and the board of directors on the long-term vision and strategies for the organization.

Koya said that the incoming executive must be “creative, strategic, and a strong leader and manager whose teams are able to inspire activists to take actions, working closely with other teams in the organization.” The individual will also be expected to be a key spokesperson to external audiences, including government officials, the media, partner organizations, and other target communities. The chief impact officer’s work will be expected to play significant role in growing the organization’s influence and visibility.

AISUA wants someone with experience and leadership in managing complex teams in a mid- to large-size organization, with non-profit experience preferred. Candidates should have “experience in a senior management role working at the executive leadership level, including with boards of directors,” the search firm said. “Demonstrated success in winning significant changes or achieved significant impact through campaigns, advocacy or communications strategies is also preferred.”

The firm also said that the winning candidate will be an innovative creative thinker with demonstrated willingness to take risks strategically. The individual must be an exceptional manager in driving performance with experience in building, aligning, mentoring and coaching a team of diverse staff; he or she should have experience fully engaging in inclusion, diversity, equity and accessibility principles.

Boston-based Koya Leadership Partners is a national executive search and human capital consulting firm that works exclusively with mission-driven organizations, institutions of higher education and social enterprises. This year, the firm was again recognized by Hunt Scanlon Media as one of the top 50 search firms in the Americas. In June, Koya was acquired by Diversified Search. With the combination of revenues and resources, Diversified Search and Koya now represent one of the largest non-profit and higher education practices in the executive search industry.

Ms. Brennan joined Koya in its early years and has worked in close partnership with founder and CEO Katie Bouton to grow the firm over the last decade. In addition to leading senior-level searches, she also oversees search operations, marketing and communications. Ms. Brennan has partnered with boards of directors and senior leaders to identify and place exceptional leaders for a range of clients, including Habitat for Humanity, Sierra Club, Slow Food USA, and Natural Resources Defense Council. Her particular areas of focus include leadership, retention, and diversity, equity and inclusion initiatives.

Ms. Delano specializes in recruiting executives to non-profits nationwide. She is focused on all aspects of the search process, from project management to client support. Ms. Delano specializes in candidate development while supporting Koya leadership. Prior to joining Koya, she served as managing producer of a weekly news show on Bloomberg TV Africa and Al Jazeera English where she worked to produce, research and pitch one-on-one profiles globally.

Here is an overview of unique officer-level positions being filled by leading recruitment firms from the Hunt Scanlon Media archives: