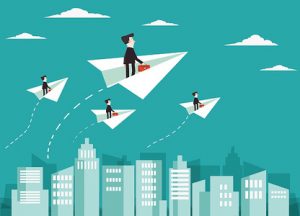 March 22, 2017 – Korn Ferry has announced several key leadership changes in three areas which the company said further positions it for growth and expansion. The managerial adjustments come on the heels of Korn Ferry releasing 2017 fiscal Q3 revenues of $381.9 million, an 11 percent top line jump over a year ago.

“Our firm is growing in both size and complexity, and we are continually evolving to increase our relevance and impact with clients,” said CEO Gary D. Burnison. “Our leadership changes reflect our firm’s transformation and the commitment we have to aligning our business with opportunity and areas of growth.”

As the integration of Hay Group with Korn Ferry is substantially complete, it has now appointed Mark Arian as this business segment’s new CEO. He takes over from Steve Kaye in two weeks. Mr. Kaye, who is departing the company at the end of the firm’s fiscal year, leaves behind a storied 24-year career at Hay Group where he served as CFO for 15 years and chief executive for the past four.

It was shortly after Mr. Kaye’s move into Hay Group’s CEO post that he arranged for the company to be sold to Korn Ferry for approximately $452 million in 2015. That deal has been transformational for Korn Ferry, generating some 46 percent of its current third quarter revenues at a time when its old core business, executive search, dipped nine percent in North America.

It will now be left largely to Mr. Arian to continue broadening the Hay Group platform for Korn Ferry while unifying and folding in that organization’s workforce, streamlining operations, and aligning cross-selling opportunities across Korn Ferry’s entire people advisory bandwidth.

Mr. Arian was recently recruited into Korn Ferry from EY, where he served as a managing principal in its financial services sector for people advisory services. Prior to that, he served as a global practice leader at AON, Towers Watson, and Hewitt Associates. He brings a skill set to his new employer that includes human capital strategy alignment, merger integration, IPO and restructuring, organizational effectiveness, total rewards optimization, leadership team effectiveness, and contingent workforce and change management expertise.

Why Recruiters Are Pivoting Away From Recruiting

One look at Korn Ferry’s just released quarterly numbers and you begin to see why the world’s largest talent provider pivoted 18 months ago. Back then, the company’s CEO, Gary Burnison, said: “We need a new conversation on people.” His acquisition of Hay Group, the biggest ever in the top tier recruiting space, was transformational – sparking a debate, while providing a roadmap, on how that conversation would proceed.

The executive recruiting industry is facing unprecedented headwinds – and nowhere is that more apparent than among the Big Five search outfits. They’ve held a lock on the C-suite recruiting business for decades. But fierce competition from boutique rivals, clashes with in-house recruiting teams and disruptive social media platforms have slowed their growth and forced them to turn away from their talent identification roots. Case in point is Korn Ferry itself. Just 40 percent of its business in the third quarter came from recruiting – and that business is under intense pressure across North America, where it just dropped nine percent ….. Here’s some further reading from Hunt Scanlon Media.

In February, May Knight became country managing director for Korn Ferry Hay Group. She is based in the company’s Hong Kong office. Ms. Knight brings over 25 years of experience from operational and consulting roles in Asia and Europe.

She was previously managing director, financial services, Asia Pacific at Accenture. There, she served as Asia Pacific insurance management consulting lead, responsible for its insurance industry group (life, non-life, reinsurance) management consulting, which spans across 17 markets across the region. Prior to that, she was a partner in Ernst & Young’s advisory practice, leading its strategy, customer & growth and digital solutions for Asia.

To further expand its product development and management capability, Andrew Huddart has joined Korn Ferry as president of its global productized services segment. To fully leverage the opportunity the company has for its global products business, Mr. Huddart will now report to Byrne Mulrooney, who will continue to serve as CEO of Korn Ferry’s Futurestep business.

“With over three decades of business experience, Andrew has successfully worked in multiple countries and with customers across the globe to build technology enabled IP businesses,” said Mr. Kaye. “His deep knowledge and expertise in product innovation, transformation and revenue growth will be a wonderful addition to our global productized services team.”

As Korn Ferry experiences growth in Asia Pacific (its recent quarter showed a 10 percent increase in executive search revenues), it has now created a chief operating officer position to provide additional support to the region. Current chief marketing officer and Korn Ferry Institute president Mike Distefano will assume this newly created role. Mr. Distefano will relocate to Shanghai from Los Angeles and work closely with Charles Tseng, president of Asia Pacific, to manage and grow the its business in the region.