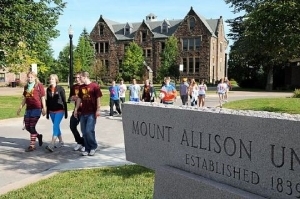 May 9, 2018 – College and universities around the world are facing new and growing challenges. Financial woes, enrollment concerns, and debates over free speech, among other issues, are all keeping leadership at institutions of higher learning on edge these days. For some schools, survival is even on the line. Recruitment of the right leaders, and choosing a search firm to identify those leaders, has become an increasingly pressing matter.

“Jean-Paul brings exceptionally strong academic and administrative experience to this role, proven skills in innovation through collaboration, and a commitment to experiential learning opportunities for students,” said Ron Outerbridge, chair of Mount Allison’s board of regents and of the presidential search committee.

Dr. Boudreau comes to Mount Allison from Ryerson University in Toronto where he is a professor of psychology and serves as special advisor and executive lead for social innovation. Previously, he was Ryerson’s dean of the faculty of arts and chair of the Department of Psychology. A developmental scientist, Mr. Boudreau holds a Ph.D. in psychology from Tufts University and is a fellow with the Canadian Psychological Association. He has collaborated with researchers around the world and published extensively in international journals and scholarly books.

Dr. Boudreau helped establish and build a comprehensive psychology department at Ryerson that offers BA, MA, and Ph.D. programs. As dean, he worked to increase external research funding, helped grow enrolment at both the undergraduate and graduate levels, and launched the university’s first social innovation incubator.

“I am thrilled and deeply honored to be named Mount Allison’s 15th president and vice chancellor,” said Dr. Boudreau. “Mount Allison has earned a longstanding reputation as one of Canada’s best undergraduate universities. I look forward to meeting with and listening to students, faculty, staff, alumni, donors and members of the Sackville community, and working together, build upon the foundation of Mount Allison’s liberal arts and sciences tradition.”

Over the past 40 years, Knightsbridge Robertson Surrette has established an extensive record of experience in executive search in the academic sector. The firm has completed over 130 searches for postsecondary clients over the last three years, including working with Ryerson University in finding its current president.

Here’s a look at some search firms that have placed new presidents at universities since the start of the year, culled from the Hunt Scanlon Media archives.

William Funk & Associates, which specializes in searches for higher education, has placed Neeli Bendapudi as the 18th president of the University of Louisville. “Neeli Bendapudi is an excellent choice for Louisville because of her strategic vision, ability to connect with students, faculty, alumni and donors, and her […] success in working with the community and state.”

The University of Charleston in West Virginia has named Martin S. Roth as its 26th president following a national search conducted by David Gring of recruiting firm Myers McRae. The selection of Dr. Roth followed an extensive search conducted over the past six months. A committee of 11 members of the UC campus community managed the search process with the help of the …