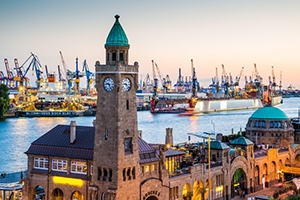 December 6, 2018 – IRC Germany (Friedrichs & Partner) has expanded, opening a new office in Hamburg and bringing aboard Susanne Wagner as executive director for that location. This in the firm’s third office in Germany, along with Dusseldorf and Stuttgart.

“With more than 16 years of executive search experience in Germany and internationally, Susanne fits in perfectly into the Friedrichs & Partner team,” said Mathias Friedrichs, managing director of IRC Germany. “With her client dedication and sustainable approach to long-term relationships, she not only brings added value to IRC Germany but also to the international IRC organization.”

Ms. Wagner spent her first professional years with companies in the hotel industry. In 2002, she moved into the executive search industry. She was involved in setting up an executive search firm in Stuttgart and acted as consultant and member of the management board responsible for national and international clients with a focus on the automotive, engineering, trade and media sectors.

Ms. Wagner has handled search assignments in Germany and across Europe. In 2009, she returned to Hamburg, where she founded her own executive search firm which served clients from the automotive, engineering, trade, logistics, medical devices and professional services sector, both nationally and internationally.

Hamburg, a port city with a history of over 800 years is today the third largest European seaport. This city in Northern Germany has a diverse economy and excellent connections to Berlin and the northeast of Germany. “These are just a few reasons why Hamburg has been chosen the right location for the third office of IRC Germany (Friedrichs & Partner),” IRC said. “The ultimate deciding factor was Susanne Wagner.”

“Our new office in Hamburg will give us access to 1.8 million inhabitants in the greater Hamburg region plus a strong metropolitan region of 5 million,” said Mr. Friedrichs.

IRC has partners in over 80 cities across Europe, the Middle East, the Americas, Africa, Asia and Australia. The consortium has completed more than 30,000 assignments for more than 3,000 clients in virtually every industry segment and function, according to the firm.

Late last year, IRC appointed Rohan Carr, director of IRC Australia (the Insight Group), as its new president. He succeeded Mr. Westerburger (IRC Netherlands), who served in the role since 2014. “Rohan is the right leader to take IRC to the next level,” said Mr. Westerburger. “He understands the challenges that our clients are facing both in traditional and emerging markets.”

The organization also recently added Buenos Aires-based executive recruiters HighFlow as a member firm. The recruiting firm, which is now called IRC Argentina, specializes in the finance & banking and sales & marketing sectors. The firm is led by partners Mauro L’Estrange and Federico Carrera.

This spring, IRC named Tomasz Sokolowski, vice president of IRC Poland (HBK), as its new EMEA regional leader. He takes over from Gaye Özcan, managing partner of IRC Turkey and EMEA regional leader since 2014. Mr. Sokolowski has over 20 years of experience in the personnel consulting industry.

IRC also recently expanded with the addition of the Office Limited in Hong Kong. Rachel Ta is the managing director and founder of the Office Limited. Its team consists of Ms. Ta, Daniel Tran and Chung Yeung. The firm’s core practices are consumer markets, industrial practice and human resources.

Amrop Expands in the U.K.