Stay Connected:
Employers are reporting a positive third quarter hiring outlook. Nearly a quarter of them plan to draft new talent this summer. Let's go inside the latest forecast. 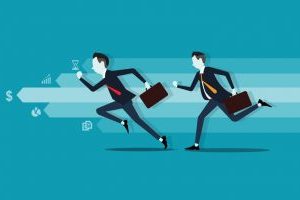 June 13, 2017 – U.S. employers expect hiring to pick up in the third quarter, with 24 percent planning to add staff between July and September. According to the latest “Employment Outlook Survey,” released today by ManpowerGroup, employers in all U.S. regions and industry sectors expect headcount to grow. The upbeat forecast indicates that the uncertain political climate continues to have little effect on employer confidence.

Adjusting the data to allow for seasonal variation, the U.S. net employment outlook stands at +17 percent, and is unchanged compared to the second quarter of 2017. When compared with this time one year ago, nationwide hiring prospects improved by two percentage points.

“Employers across the country are optimistic but don’t want to get ahead of themselves,” said Michael Stull, senior vice president, Manpower North America. “In most sectors, employers reported relatively stable hiring plans with some upticks – most notably in durable goods manufacturing, where there are the strongest hiring intentions in more than nine years. Technological disruption is rapidly changing skills needs, especially in manufacturing as the marketplace transitions from typical labor to more advanced roles. To keep up, we’re seeing employers increasingly invest in training and development programs so people can learn while they earn,” he said. “We’re focused on building programs to help workers get the skills they need for tomorrow while staying employable today.”

Employers in 24 percent of the Midwest businesses surveyed expect an increase in staffing during the next three months, while three percent expect payrolls to decline, resulting in a net employment outlook of +21 percent. Once the data is adjusted to allow for seasonal variation, hiring plans remain relatively stable compared with the previous quarter and are slightly stronger when compared with the third quarter of 2016.

Payroll growth is expected by 23 percent of employers in the Northeast during the third quarter, while five percent anticipate a decline in staffing levels. The resulting net employment outlook stands at +18 percent. Once the data is adjusted to allow for seasonal variation, hiring prospects for the region remain relatively stable compared to the previous quarter and are unchanged when compared with this time one year ago.

What Are the Greatest Hiring Needs of 2017?
Here is a list of executive jobs expected to be in demand this year in the technology, life sciences and industrial sectors. The continued economic recovery, digitalization, and cyber-security concerns will be among the chief factors driving executive hiring in 2017.

When looked at versus the second quarter of 2017, a moderately stronger hiring pace is anticipated by employers in two Northeast industry sectors during the upcoming quarter: Durable goods manufacturing and nondurable goods manufacturing. Employers expect a slightly stronger labor market in financial activities, professional & business services and transportation & utilities.

Employers in 23 percent of the businesses surveyed in the South expect to grow payrolls from July to September. Four percent of employers, meanwhile, anticipate a drop in staffing levels, resulting in a net employment outlook of +19 percent. Once the data is adjusted to allow for seasonal variation, hiring intentions are unchanged compared with the previous quarter and remain relatively stable when compared with the third quarter of last year.

During the third quarter, slightly stronger hiring activity is expected by employers in four industry sectors in the South, when compared with the previous quarter: government, leisure & hospitality, durable goods manufacturing and transportation & utilities.

Staffing levels are expected to increase during the third quarter in 25 percent of the businesses surveyed in the West. Four percent, however, expect a dip in employment levels. The resulting net employment outlook stands at +21 percent. Once the data is adjusted to allow for seasonal variation, hiring prospects are unchanged quarter-over-quarter and remain relatively stable when compared with this time one year ago.

Employers in four industry sectors across the West expect a slight increase in staffing levels during the third quarter when compared with the previous quarter: government, leisure & hospitality, durable goods manufacturing and wholesale & retail trade. 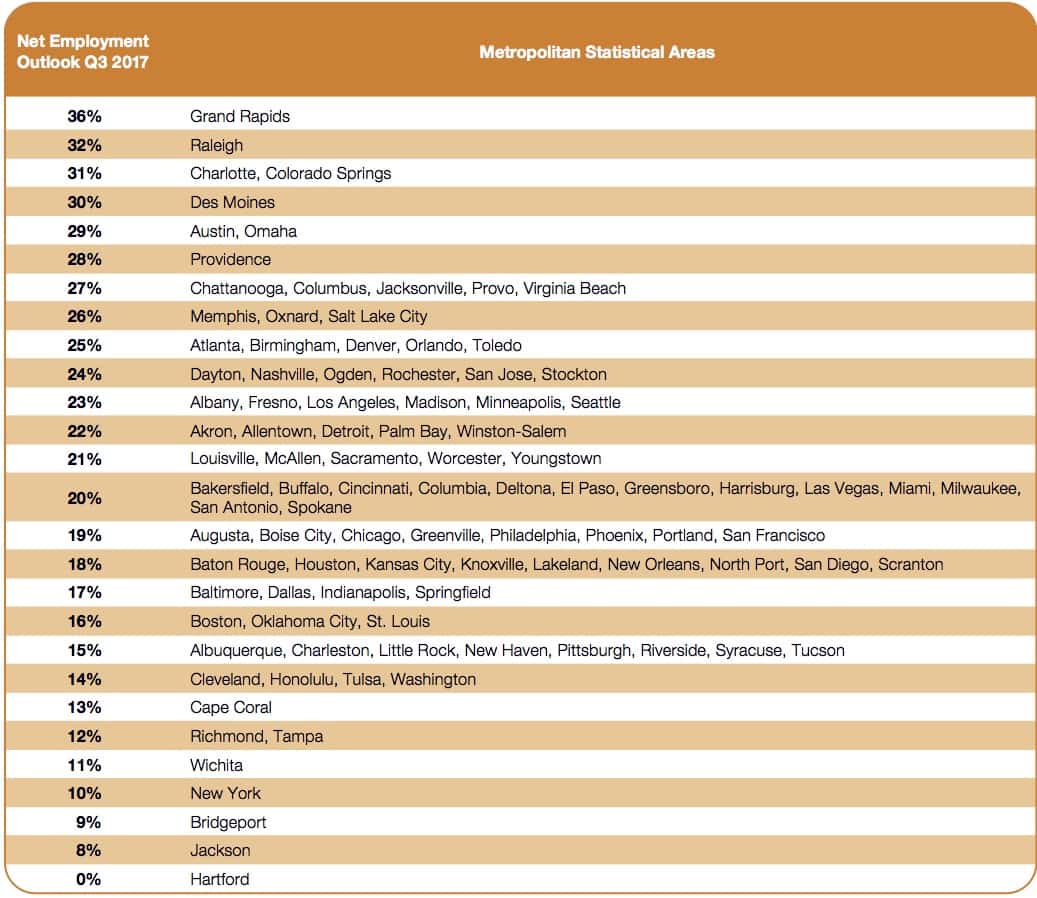 ManpowerGroup interviewed nearly 59,000 employers across 43 countries and territories to forecast labor market activity in the third quarter. All participants were asked, “How do you anticipate total employment at your location to change in the three months to the end of September 2017 as compared to the current quarter?”

The forecast indicated that payrolls will grow by varying degrees in 41 of 43 countries and territories over the next three months. An overview of the global results indicated that employer confidence is similar to that reported in the second quarter with the majority of respondents content to either retain current staff or grow payrolls marginally as they await more definitive signals from the marketplace.

Some employers expect to encounter headwinds in the coming months. For instance, employer confidence in India dips to its least optimistic level since their survey was launched. Similarly, forecasts in Panama and Peru are the weakest reported since their surveys began, and job prospects in Singapore declined to a level not seen since the recession. Conversely, the forecast in Brazil has improved steadily for four consecutive quarters and Brazilian employers reported positive hiring plans for the first time in more than two years.

Hiring Pace to Accelerate Heading Into Spring
Employers are reporting the strongest second quarter hiring outlook in eight years. Nearly a quarter of them plan to draft staff this spring. Let’s go inside the latest upbeat forecast and hear viewpoints from several executive recruiters.

When compared to the prior quarter’s results, forecasts improved in 17 countries and territories, declined in 16 and remain unchanged in 10. A more confident pattern emerges, however, when forecasts are compared with last year at this time; hiring intentions improved in 26 countries, declined in only 15 and remain unchanged in two. Globally, the strongest third-quarter hiring plans are reported in Japan, Taiwan, Hungary and the U.S. The weakest forecasts are in Italy, the Czech Republic and Finland.

In the Europe, Middle East & Africa regions, workforce gains are expected in 23 of 25 countries. Hiring plans improved in nine countries quarter-over-quarter, weakened in 10 and are unchanged in six. In a year-over-year comparison, outlooks improved in 15 countries and declined in 10. Hungarian job seekers can expect the region’s strongest third-quarter hiring plans. Additionally, the outlook in Turkey rebounded with more than one in four employers planning to add to their payrolls in the next three months. Italian employers reported the region’s weakest outlook as well, the only negative hiring intentions among the 43 countries and territories surveyed.

Positive outlooks are reported in each of the 10 countries surveyed in the Americas. Hiring confidence strengthened in six countries, dipped in three and is unchanged in one when compared to the April-June quarter. Similarly, the year-over-year comparison reveals employers in six countries reported improved hiring prospects, while hiring plans weakened in three and are unchanged in one. For the fourth consecutive quarter employers in the U.S. reported the strongest hiring plans in the Americas, while opportunities for job seekers are expected.