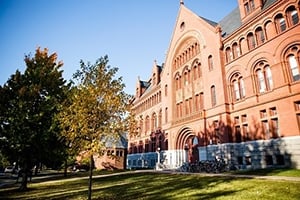 May 21, 2018 – The hunt for university leadership has been heating up, especially with searches for provosts. Just recently, Greenwood / Asher & Associates recruited Susan Edwards as the new executive vice president for academic affairs and provost of Wright State University in Fairborn, OH. Thomas Sudkamp is stepping down from his role at the end of June. President Jan Greenwood and vice president Betty Turner Asher led the assignment.

Ms. Edwards, who will start her new role on July 30, is currently the vice provost for faculty affairs at Appalachian State University. She was selected as provost after a four-month national search that included a diverse pool of approximately 50 candidates.

“Dr. Edwards’ experience as a teacher, researcher and administrator; her leadership skills; and her personal commitment to student success make her the perfect leader to join our university at this time,” said Cheryl B. Schrader, president of Wright State. “Those who interacted with her said they were impressed with her ability to listen closely, analyze questions quickly and communicate clearly,” she said. “She has worked at a variety of institutions, including a world-class global research university and Appalachian State, which is committed to student success and student-centered research at both the undergraduate and graduate levels.”

In her role with Appalachian State, Ms. Edwards is responsible for overseeing all areas of faculty evaluation and development and serves as the academic affairs liaison on all personnel matters. Her work has included a variety of focuses including oversight of campus accreditation with the Southern Association of Colleges and Schools Commission on Colleges. In 2007, Ms. Edwards left her native Australia to join the Department of Biology at Appalachian State. She then took on a leadership role as assistant chair for three years before being appointed chair of the department in 2012.

Previously, she was the Australian equivalent of an associate professor in the Department of Physiology and Pharmacology and served as dean’s campus liaison in the faculty of medicine, health and molecular sciences at James Cook University in Australia. She also served as a visiting assistant professor in the Department of Biology at Georgia Southern University. To date, she has developed and taught over 21 courses in 10 different degree programs ranging from general biology to medicine. She has also taught degree programs in remote areas of Australia and the Torres Straits as well as at the Institute of Koori/Indigenous Education at Deakin University.

Ms. Edwards said she was drawn to Wright State because of the university’s core values and dedication to students. “I saw a lot of similarities to Wright State’s values as an institution and the values that I hold dear – student-centered, student-oriented and a very dedicated faculty and staff,” she said. “Then when I visited I realized the values are not just words, they’re actually part of the institution’s DNA. It was palpable.”

Dr. Greenwood is a pioneer in U.S. higher education, having been the first woman president of a public four-year and graduate institution in Virginia. She is a licensed psychologist with experience as a psychometrist and with post-doctoral training in group methods. She brings these skill sets to her work with clients, candidates and search committees.

Ms. Asher brings to executive search, consulting and training a unique background of leadership service at all levels of higher education institutions and systems, in academics and student affairs and in public and private institutions.

Higher Education Leadership Search has been selected by Northeastern State University in Oklahoma to help find a new provost and vice president of academic affairs. Consultants Bill Meehan and Alan Medders are leading the assignment. Candidates must hold a doctorate or other appropriate terminal degree and will have a distinguished record of scholarship …