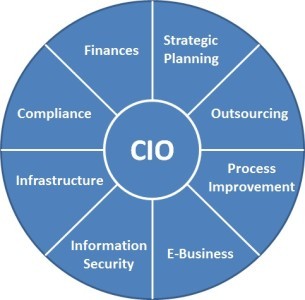 Mr. Simons most recently served as vice president of information technology and chief information officer at Abbott Laboratories. Before that, he served in CIO roles with HealthPartners and GSK Pharmaceuticals.

Aurora is a not-for-profit Wisconsin-area healthcare provider and a national leader in efforts to improve healthcare quality. It offers services at sites in more than 90 communities throughout eastern Wisconsin and northern Illinois.

CIO hiring continues to be on the rise. Nearly a quarter (22 percent) of U.S. CIOs plan to expand their IT teams in the second half of 2015, according to the just-released Robert Half Technology ‘IT Hiring Forecast Trend Report.’ It represents a three-point rise from the beginning of the year and an eight percentage point jump from one year ago.

“CIOs are bullish on the economy and they are gearing up to expand their IT departments as we head into the second half of 2015,” said Hunt Scanlon Media CEO Scott A. Scanlon. According to the Robert Half report, 67 percent of CIOs intend to hire only for open IT roles, while just nine percent expect putting hiring plans on hold. Only two percent of CIOs polled expect to reduce their IT staff in the second half of the year.

The survey also found that recruiting remains a challenge: 59 percent of CIOs said that it is ‘somewhat’ or ‘very challenging’ to find skilled IT professionals. Sixty-nine percent of respondents said they are taking action to address recruiting challenges for IT staff. Some steps they are taking include increasing networking activities (48 percent); using recruiters or staffing firms (37 percent); offering referral bonuses (36 percent); and hiring consultants to augment current staff (36 percent).

“Skilled technology professionals are in high demand across the country, and companies are going to great lengths to attract the best talent,” said John Reed, senior executive director of Robert Half Technology. “In this job seekers’ market, technology leaders must not only develop innovative technology solutions, but also create a department culture that inspires and rewards innovation in its employees.”

Check Out These Related Articles on Diversified Search: