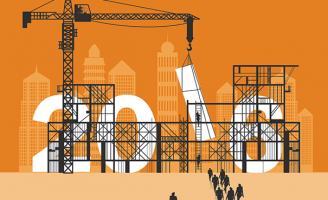 The Business Roundtable CEO Economic Outlook Index — a composite of CEO projections for sales and plans for capital spending and hiring over the next six months — increased modestly from 69.4 in the first quarter to 73.5 in the second quarter.

The Index remains below its historical average of 79.8 but it remains well above 50, indicating continued economic expansion.

CEO expectations for sales over the next six months improved by 0.8 points, while plans for capital expenditures moved up by 8.1 points, relative to last quarter. Expectations for hiring increased by 3.5 points from last quarter. The report also found that 29 percent of CEOs expect their company’s U.S. employment to increase in the next six months. 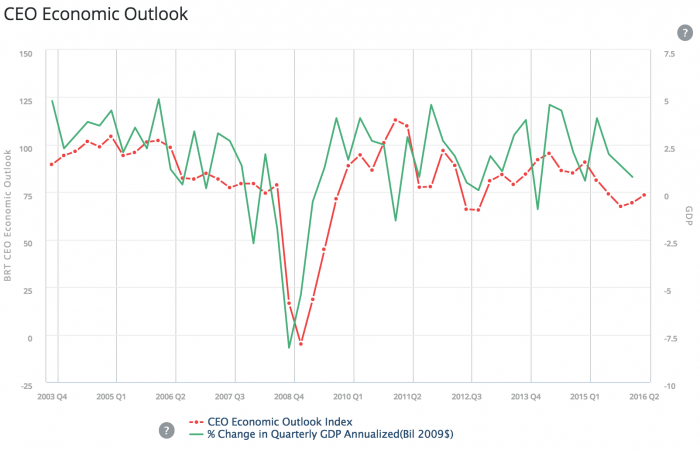 However, in their third estimate of real GDP growth for 2016, CEOs expect 2.1 percent growth, down from their 2.2 percent estimate in the first quarter of 2016.

“Increased plans for near-term sales, investment and hiring indicates modest economic improvement,” said Doug Oberhelman, chairman and CEO of Caterpillar Inc., and chairman of Business Roundtable. “But the CEO estimate for barely more than two percent GDP growth this year points to an economy that continues to perform below its potential.”

“Unfortunately, it’s more of the same ‘one step forward, one step back’ we’ve been experiencing for a number of years now,” Mr. Oberhelman continued. “We need sustained, healthy growth, which would be aided by enactment of pro-growth policies, such as ratifying the Trans-Pacific Partnership and updating our outdated tax system. Absent that, the U.S. economy will continue to be stuck in the slow lane.”

The Business Roundtable ‘CEO Economic Outlook Survey,’ conducted quarterly since 2002, provides a forward looking view of the economy by Business Roundtable member CEOs. The survey is designed to provide a picture about the future direction of the U.S. economy by asking CEOs to report plans for their company’s sales, capital expenditures and employment in the next six months. 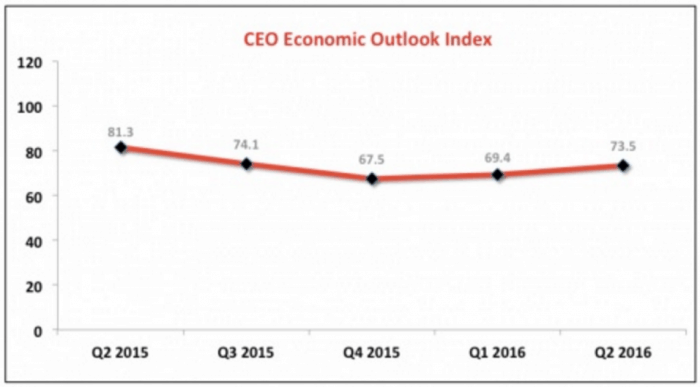 According to a separate study recently released by The Conference Board, CEO confidence rose again in the second quarter after edging up in the prior quarter.

“Confidence among CEOs increased for the second quarter this year. CEOs’ short term outlook for the U.S. is somewhat neutral, while the outlook for Japan, China and Brazil improved from last quarter, but on whole remains negative,” said Lynn Franco, director of economic indicators at The Conference Board. “Prospects for India and Europe were moderately positive, although sentiment is likely to have changed following the approval of the Brexit referendum in June. Three out of every four CEOs expect profits will increase over the coming year, with market demand growth and cost reductions the major driving forces,” she added.

These reports follow the most recent labor report, which saw employers adding 287,000 jobs last month as the U.S. unemployment rate rising slightly to 4.9 percent. During the month, job growth occurred in the leisure and hospitality, healthcare and social assistance, and financial services sectors.

Other outlooks for the remainder of the year have also been positive.

According to the latest Manpower ‘Employment Outlook Survey,’ 23 percent of employers anticipate increasing staff levels during the third quarter.

Yet, with hiring gaining momentum among companies, talent shortages persist.

The inadequate supply of qualified and skilled talent is the second-biggest threat to U.S. companies’ ability to meet revenue or business performance targets, second only to “increased competitive pressures,” said the recent Randstad ‘U.S. Workplace Trends’ report. Nearly eight-in-10 hiring decision makers (79 percent) agree that when positions become available at their organization, they struggle to find people whose skills match the job requirements.

“Often the challenge for hiring executives isn’t the quantity of available candidates, instead it’s the increasing difficulty in finding talent that is qualified, with the right skills and cultural fit for the position,” said Jim Link, chief human resources officer (CHRO) of Randstad North America. “People are the key factor linking innovation, competitiveness and growth for companies today. But securing skilled workers is getting more complex and challenging than ever before. As organizations further increase their hiring activity, low unemployment means business leaders will have to work harder at hiring and keeping quality talent particularly as employees gain more options and confidence to change employers.”