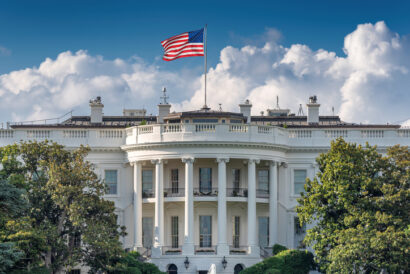 January 20, 2017 – As President Barack Obama hands off a stable economy and an unemployment rate of 4.7 percent today to Donald J. Trump, top business leaders are looking ahead to 2017 with positive outlooks.

Chief executive officers report higher expectations for sales and hiring over the next six months, but lower expectations for capital investment, according to the latest Business Roundtable ‘CEO Economic Outlook Survey.’ While the outlook for hiring is positive, the overall results suggest continued economic growth, albeit at a slow pace.

The Business Roundtable CEO Economic Outlook Index — a composite of CEO projections for sales and plans for capital spending and hiring over the next six months — rose by 4.6 points, from 69.6 in the third quarter to 74.2 in the fourth quarter. The Index remains below its historical average of 79.6.

“America’s business leaders are encouraged by the incoming president’s pledge to boost economic growth,” said Doug Oberhelman, chairman and CEO of Caterpillar Inc. and chairman of Business Roundtable. “We will work with the incoming Administration and Congress to enact pro-growth policies such as modernizing the U.S. tax system, adopting a smarter approach to regulation, investing in infrastructure and focusing on the education and training people need to thrive in the 21st century economy.” 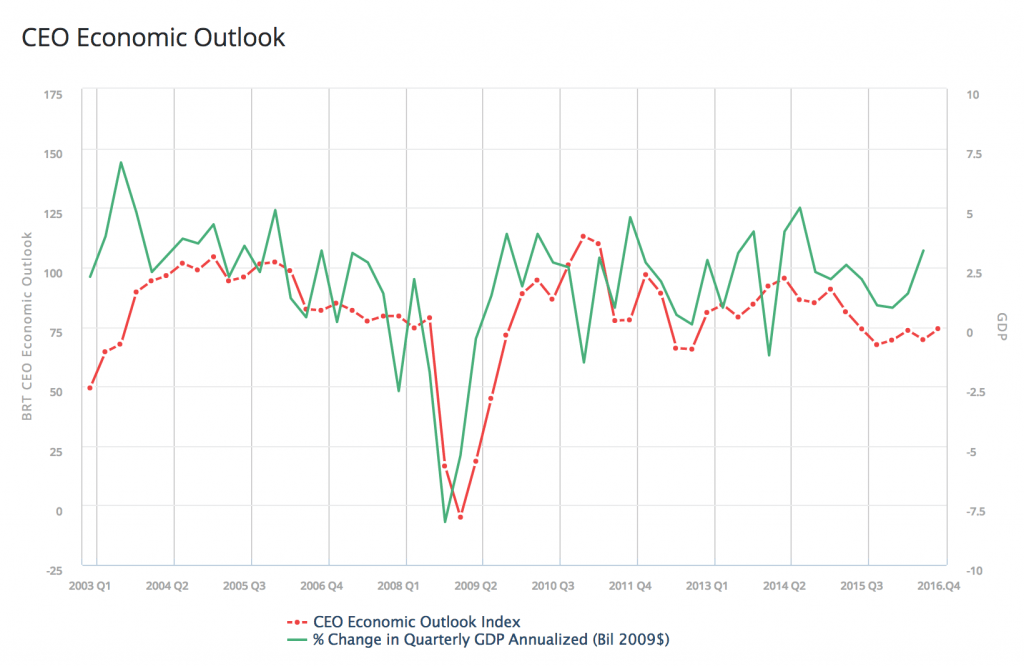 “CEO confidence surged in the final quarter of 2016, reaching its highest level in nearly six years,” said Lynn Franco, director of economic indicators at The Conference Board. “CEOs were considerably more optimistic about short-term growth prospects in the U.S. than in the third quarter, and to a lesser degree about prospects in developed and emerging markets.”

CEOs’ short-term outlook for the U.S. economy also improved markedly, with approximately 67 percent expecting better economic conditions over the next six months, up from 25 percent last quarter. The outlook for their own industries was also more favorable, with 58 percent of CEOs anticipating an improvement over the next six months, compared to about 23 percent in the third quarter.

CEOs are significantly more optimistic about short-term prospects for the U.S. following the presidential election. Their expectations for Brazil and Europe have turned slightly positive. Expectations for India are still positive, although less so than last quarter. Expectations for China and Japan remain neutral.

Scott Dunklee, founder and managing partner of The Lancer Group in La Jolla, CA, said his search firm has seen firsthand the effects of that boost in CEO confidence. “Absolutely,” he says. “It’s probably simply because there is now more certainty in the marketplace than there was during the election. I don’t think that’s necessarily because one particular person won, but it’s behind us and people feel they at least have a view of where things are going, which always helps.”

Given the long campaign season and the wide difference in outlook between the presidential candidates and the Democrats and Republicans in general, uncertainty about the direction of the country was prevalent. “Uncertainty is not your friend when you’re a CEO trying to make long-term decisions,” Mr. Dunklee said. “So any clearer information adds to the ability to make decisions, just as a general rule.”

Good Days Ahead for Recruiters

The Lancer Group serves clients across a broad range of industries. Working in partnership with private equity firms, their portfolio companies, and public corporations, the firm recruits leaders of many stripes, including CEOs, CFOs, C-suite executives, and board directors as well as PE investment professionals and operating partners.

Another likely reason behind the upturn in CEO confidence is simply that the U.S. economy continues to perform well, noted Mr. Dunklee. “As you look globally at the U.S. versus the global players, we are definitely a clear bright spot,” he said. “The U.S. is the bright economic light at the moment. So that helps. And then if you’ve seen the numbers on the economy overall, those are all positive, and that adds a lot to it.”

Mr. Dunklee pointed to a recent report by global investment firm Kohlberg, Kravis and Roberts suggesting that positive economic trends should continue for the next two years, and he said that’s a good sign that CEO confidence will continue. “I think it allows people to make some commitments that they would have otherwise been holding off making,” he concluded.

As for the search industry, CEO confidence translates into forward movement as well. “At the granular level it translates into a company feeling confident about even just hiring more sales people, for example,” he said. “Sales people don’t get productive typically for the first six months, so you have to make a longer term commitment.”

And at the CEO level, he noted, that confidence means that projects that have been on the drawing board, that might require a year or two to complete, are now getting the green light.

CEO confidence, not unlike consumer confidence, can be infectious. “A lot of this stuff is psychological,” said Mr. Dunklee. “To a certain extent, CEOs talk to each other. CEOs go to the same conferences. If people are in the same industry and they’re hearing good news, that does tend to re-enforce their view of the world and makes them feel good about making investments. Whether Joe is my competitor or Joe is just a peer at a noncompetitive company in the same industry, if Joe feels good about things, that makes me feel good about things because he’s in my peer group. It can be a contagious thing,” he said.