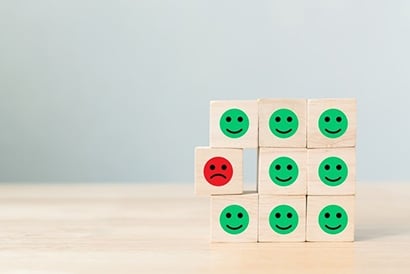 February 7, 2019 – It happens every day with companies: An employee in a critical position has become a problem and needs to be terminated or reassigned. A new report from Russell Riendeau, senior partner at New Frontier Search Company, looks at the dangerous fallout factors when leaders delay the dismissal of problematic employees.

Dr. Riendeau certainly has the qualifications to speak on the topic. He is the author of seven books on executive leadership, peak performance and sales strategies. With a doctorate in behavioral psychology, Dr. Riendeau has served as an adjunct instructor at Northwestern University and General Electric’s in-house university.

An employee could be problematic for any number of reasons, he said. The imminent termination could be the result of ineffective leadership, harassment, inability to fit the culture, being a non-team player, poor decision-making, lack of accountability, and more.

“Given most states in the U.S. are at-will states, meaning a person can be terminated for any reason, there is often little red tape preventing a person’s firing when the hiring manager or leadership realizes this employee must be dismissed,” Dr. Riendeau said. “It’s not fun, but it is the responsibility of leaders to make these critical decisions swiftly.”

“In reality, anecdotal and empirical evidence suggest these critical terminations take too long to occur,” he said. “Leadership procrastinates on delivering the news, ignores warning signs and fallout damage being done, only to allow the situation to turn into a crisis with more drama and consternation in the organization.”

Fallout from Failing to Fire

A single underperformer can have a devastating effect on a company. And yet, more often than not, employees will not fix their own problems. According to Dr. Russ Riendeau, chief behavioral scientist at New Frontier Search Company, “It is very difficult for people to change or self-correct when they’re not really sure their doing anything wrong in the first place. So it is important to address and the issue with an employee early on.” In the following podcast, Dr. Riendeau discusses how leaders must have “confidence in themselves to make decisions that are in the best interest of the company.” Listen Now!

Dr. Riendeau laid out the serious fallout factors and threats that can occur and gain momentum in the critical time that a problematic employee is allowed to remain in their role.

“Whether leadership believes the following behaviors/actions and positioning are actually possible or occurring during this period of non-action in dismissal, research confirms these activities are consistent and very much a reality,” Dr. Riendeau said.

Hiring managers begin to be perceived as not recognizing the need or lacking the courage to remove a known problematic employee. To take no action simply looks bad and seems as if the employer either condones or enables poor performance by employees.

“This lack of initiative will resonate more with your top workers than the marginal ones, as top workers are more likely to leave in frustration and able to find jobs faster than marginal workers,” Dr. Riendeau said.

Allowing Free Time/Compensation to Build a Case against Termination

Postponing termination potentially allows the employee in question time to prepare for their departure on their own terms, allows access to competitive intelligence, provides a steady income to look at other job opportunities, and strengthens their relationships and positioning with key customers or even the competition.

“Delaying termination allows more time for the candidate to seek legal counsel to negotiate their severance and exit package, as well as non-compete agreement review,” said Dr. Riendeau. “Equally as important is the fact that this problem employee, if not dismissed, can begin to badmouth the leadership team and plant inaccurate impressions in other employees that create more drama, gossiping and turnover.”

Delaying termination suggests the employee’s behavior or non-performance issues are not that bad, he said. Otherwise, the thinking goes, the person would have been dismissed a long time ago.

A Look Inside Today’s Worker-Employer Relationship
There is an ‘employee relationship economy’ on the rise being driven by technology, a changing workforce and globalization. With it, human resources management will increasingly need strategies to embrace a new era of ‘boomeranging’ employees – those who re-enter employment with the same organization), frequent job changes and ‘tours of duty.’

“Firing sooner rather than later gives leadership a chance to present the case in positive terms to the existing staff, as opposed to responding to rumors, allegations of issues that may be untrue or irrelevant to the situation,” said Dr. Riendeau.

For the most part, everybody in the company is aware of this problem already, he said. It is also highly probable this employee is already actively seeking a new job. They know they’re performing poorly and that time may be short. Should he or she resign at any time and your team does not have a replacement search in the works, this will create more repercussions around lost sales revenue, client dissatisfaction and morale issues turnover.

Related: Why ‘Boomerang Employees’ Might Be In Your Future

“Delaying dismissal creates stress in current employees who try to distance themselves from this problem employee to avoid the perception of being “guilty by association,” said Dr. Riendeau.

The cost of the retainer to jump-start this search is far less costly than potential lost sales and proposals, as well as morale costs and potential turnover, he said.

The High Cost of Picking a Wrong Leader
Selecting a CEO is arguably one of the most vital decisions a board makes. Companies that choose the wrong leader can suffer hits to their stock price and market capitalization and lose in a variety of areas — momentum, opportunities, reputation, customer goodwill and, perhaps most importantly, trust within the organization, which can take years to re-establish.

“Research confirms the costs of a bad hire can range from $75,000 to $250,000 when factoring in lost revenue, turnover, customer dissension, legal fees, severance, and so on,” said Dr. Riendeau. “Google this topic to see for yourself the extensive data and evidence of these extreme losses business experience,” he added.

“Social media has a big mouth and any savvy professional will be able to follow the trail of who was in the role prior and connect the dots,” said Dr. Riendeau. “Delaying the removal and replacement of this employee will creates confusion and uncertainty in future recruited candidates.”

“They will question why the person was allowed to stay, despite knowing he was creating problems and morale issues,” he said.

A tight labor market is producing longer lead times to secure viable candidates. “This adds more stress on the current staff and lost revenue streams or customer support issues as a result,” said Dr. Riendeau. “This lost revenue and hidden costs are most often ignored because they are not creating immediate pain. However, the ramifications six months later will be real.”

“As you can see, while these critical consequences are subtle and often hidden in plain sight, they are dangerous elements to ignore and not prepare for,” Dr. Riendeau said. “When a leader realizes there is a problem employee, all the research and evidence suggests that the sooner that person is removed, there will be less fallout around turnover of good employees and lost revenue will be saved.”

Related: 4 Ways to Build Talent Pipelines of the Future