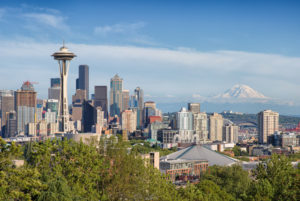 February 5, 2020 – Executive search firm StevenDouglas is expanding its presence in Seattle to include information technology search, staffing and consulting services. The firm also named Eamon Reilly to managing director, Seattle, to lead the practice. Mr. Reilly, a Seattle native, is focusing on supporting the expansion of the firm’s IT staffing and search service capabilities on the West Coast after a long tenure in the New York office.

“This expansion is in direct response to demand for our services on the West Coast and we were very fortunate to have a proven leader like Eamon volunteer to open the practice.” said Matt Shore, president of StevenDouglas. “Eamon has played a significant role in the growth of our New York office over the last nine years and his desire to move back home was fortuitous for us as we were looking to expand our service offerings in Seattle. We are very excited about the possibilities with him leading the practice.”

Mr. Reilly, who joined the firm in 2011, has experience in technology staffing, consulting and talent acquisition with clients ranging from start-ups to Fortune 100 businesses since 2005. Prior to joining StevenDouglas, he was a national account director in a technology staffing and consulting firm where he focused specifically in user experience design and product development.

Trends have shown that finding technology talent in general has become one of the most difficult to staff functional areas for many companies, and demand continues to increase for niche tech specialties. According to the U.S. Bureau of Labor Statistics, “Employment of computer and information technology occupations is projected to grow 12 percent from 2018 to 2028, much faster than the average for all occupations. These occupations are projected to add about 546,200 new jobs.”

Seattle is well-known for its robust technology ecosystem. The city’s economy is driven by a mix of older industrial companies, and “new economy” internet and technology companies, service, design and clean technology companies. Seattle is a hotbed for start-up businesses, especially in green building and clean technologies, being ranked as America’s No. 1 “smarter city” based on its government policies and green economy. Four companies on the Fortune 500 list of America’s largest companies, based on total revenue, are headquartered in Seattle: internet retailer Amazon, coffee chain Starbucks, department store Nordstrom and freight forwarder Expeditors International of Washington.

StevenDouglas continues to be in growth mode, reporting a 200 percent increase in personnel in the last five years, with numerous offices opening across the U.S. Recently, the firm opened an office in New York’s Westchester County to service client demand both locally and in the Northeast. The firm appointed Don Zinn as vice president of executive search and leader of the location.

StevenDouglas has opened a handful of new offices in the past several months. In November, the firm opened a new office in Bethesda, MD, which is led by Elana Burr. The office has a focus on expanding the firm’s capabilities in providing IT staffing and search services locally. Shawn Redwine also launched the finance and accounting search practice out of the firm’s existing Reston, VA location.

StevenDouglas Opens New Office in Jacksonville
This marks the firm’s sixth office in the Sunshine State. Leading the office is Ken Heinrich. Mr. Heinrich joined StevenDouglas in the HR search division last year as a senior recruiter. His sales and recruiting experience make him an important part of the continued success and growth of this practice.

StevenDouglas also opened new offices in Princeton, NJ and Boston. John Gramer was named vice president of executive search, and is based out of the firm’s Princeton office. He has over 35 years of recruiting experience and has placed top talent across the C-suite from CEOs, COOs and CFOs to marketing and sales executives. Mr. Gramer previously was president of healthcare-focused Cejka Search. Leading the Boston office is Kirk Bukowski, vice president of executive search. He has more than 25 years in executive search and talent acquisition consulting. Prior to joining StevenDouglas, Mr. Bukowski led the North American search practice for the Bowdoin Group.

Lastly, StevenDouglas opened a new office in San Diego, CA. Bradley Swisher joined the office as managing director of technology search. The firm decided on San Diego on the office location due to a combination of client demand, as well as aligning with the firm’s continued efforts to strengthen the scope and specialties of its expanding technology division.

Check Out These Related Articles On Firms Expanding in Seattle: