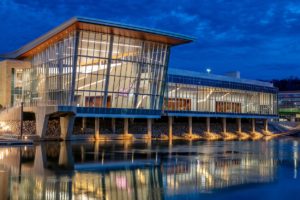 May 26, 2020 – The Charleston Coliseum & Convention Center in West Virginia has retained executive recruitment firm SearchWide Global to find its next executive director. Mark Gnatovic, senior vice president at SearchWide, is leading the assignment.

The executive director will be responsible for overall management, promotion and operation of the Charleston Coliseum & Convention Center and Municipal Auditorium, including strategy, service, sales, planning, booking, marketing, maintenance, security and accounting. The position is accountable to the mayor of Charleston and the board of directors for the development of policies, procedures and programs for achieving the goals set by the city and the board.

The Charleston Coliseum & Convention Center wants a dynamic leader with visionary abilities, excellent listening, communication and interpersonal skills, and organizational ability, said SearchWide Global. The individual must have the ability to perform effectively under significant pressure typically associated with meeting the demands and timetables of the entertainment industry. The next executive director should also have considerable knowledge of safety regulations and other federal, state or local laws and regulations.

The search firm also said that the right candidate must have a strong orientation towards hospitality/customer service for the meeting, convention and entertainment industry. He or she should also possess strong knowledge of budgeting, event management, facility operating standards, building maintenance, custodial, personnel and office management.

As the entertainment and convention centerpiece of Charleston, the Coliseum & Convention Center hosts the majority of the state’s premier entertainment, sporting and corporate events. A recent $100-million expansion and renovation project that started in 2015 and completed construction in 2018 has redefined Charleston as a premier meeting and event destination. Over the past 60 years, Charleston has played host to countless superstars, including Tina Turner, Elton John, Stevie Nicks, Aerosmith, Taylor Swift, Garth Brooks and others.

SearchWide Global, based in St. Paul, MN, is a full service executive recruitment firm primarily for companies in the travel, tourism, hospitality, convention, trade association, venue management and experiential marketing industries. The firm specializes in C-level and director-level executive searches for companies ranging in size from Fortune 500 corporations to mid-sized public and private companies and associations.

Mr. Gnatovic leads searches for the convention, trade show and experiential marketing and event industries, as well as convention centers, stadiums, arenas and performing arts facilities. Prior to joining SearchWide in 2006, he spent more than 15 years in the convention industry.