Menu
View our Events
Stay Connected:
It’s hardly the most important factor in winning a job, but a good resume can go a long way in helping push you along the career path. A new survey reveals what leaders think about resumes, and two recruiting experts then weigh in. 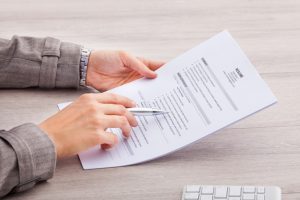 July 14, 2017 – Resumes matter, but not as much as just five years ago, according to a new survey by the Futurestep division of Korn Ferry. What’s more, the study said, resumes are the least important of the key factors that go into a job search. Yet it could be a big mistake to neglect that particular document.

“Candidates who rise above the rest in this very competitive job environment, are those who understand that landing a job takes a balanced approach,” said Peter Keseric, a management consultant, financial services and real estate, for Futurestep, Korn Ferry’s professional level and RPO recruiting business. “Resumes are not going away. They’re still an important part of the overall job search process. However, nothing gets a candidate ahead like networking. And networking today is a contact sport.”

Indeed, 77 percent of the survey’s respondents ranked networking as the No.1 factor in looking for a job, followed by interviewing (16 percent), social/ online presence (four percent), and resumes (three percent).

Resumes do appear to be diminishing in the eyes of those doing the hiring.  Twenty-eight percent of the respondents to the Futurestep poll said that resumes were “somewhat less important” to the job search process than five years ago. Another seven percent felt they were “significantly less important.”

“While I agree that networking has become much more important to an effective job search, I think it’s a mistake not to have an up-to-date and well-written resume,” said Kathy Gallo, founder and managing partner of the Goodstone Group, a New York-based global executive coaching network. “You have to cover all your bases. Some hiring organizations prefer that a candidate has a robust LinkedIn profile. Others – even for fairly senior roles – require that you submit a resume along with your application via their website.”

In the bigger picture of winning a job, how does it compare to other factors?  “It really depends,” she said. “I know candidates who landed highly desirable roles simply by networking.  In certain sectors and in some circles, your reputation in the role that you’re leaving is all that you need, but for most of us, it’s smart to prepared to communicate your story in multiple ways.”

In many ways, resumes are just a starting point in winning a new position. It is up to the job seeker to build upon what their resume says when they meet representatives from the employer in person. “The resume is simply the introduction,” said Richard J. Kinsley, CEO and managing partner of the Kinsley Sarn Executive Search, an Indianapolis-based search firm. “Without a good resume, it is difficult to get noticed.  What is most important is the ability to communicate your experiences and accomplishments in interviews, the ability to read the interviewer to make sure you are providing the right amount of information without being overly verbose, and the ability to adapt your style to fit the culture or atmosphere created by the interviewer.”

Resumes have their purpose, however, and as part of the bigger job-hunt equation, that purpose can be significant. They are a brief guide, of sorts, to one’s professional journey. They also send a message about how well the person might fit in the job they are applying for. “Resumes are important because they provide a candidate the opportunity to tell us clearly and succinctly, the positions they have held, the situation they’ve encountered, the opportunity each situation represented, the details of their responsibilities, the actions they took and the results they achieved,” said Mr. Kinsley. “Through their resume, candidates can demonstrate a pattern of increased performance and recognition that would convince us of the value of considering them for opportunities we have been engaged to fill. Alternatively if they are engaging in a search, passively seeking a new opportunity or simply blindly sending their information. A good resume provides the framework for an introductory discussion.”

Best Methods to Lure Active and Passive Job Candidates
Today’s challenge is no longer identifying and sourcing candidates, but getting their attention. But according to one new study, the definition of active and passive candidate, and the perceived value of each, is evolving.

Producing a good resume calls for insight about oneself and one’s career. It also demands an ability to communicate that self-knowledge to others, in a brief and professional manner. In many ways, a good resume answers questions before they are even asked. “I look for evidence of impact, a candidate’s awareness of what a person has learned from her or his experiences, and an ability to communicate clearly,” said Ms. Gallo. “A good resume is complete but succinct; describes situations, approaches taken, and impact; and contains no unexplained long gaps in experience, grammar errors, or typos. For early career candidates, I like to see more specific descriptions of skills, especially if they are relevant for a particular position. For example, if the position requires financial modelling, I like to know that a candidate has programmed macros and pivot tables in Excel. When I’m interviewing a candidate, I like to hear a ‘story’ of their experiences that their resume helps them tell.”

But typos and grammar are only part of what makes for a weak resume. Too many resumes fail to tell the deeper story of who the candidate is and why the individual would be right for the job in question. Failing to provide such information can be a knockout blow for one’s candidacy.

“Bad resumes are all too common unfortunately,” said Mr. Kinsley. “Many are simply job descriptions: The candidate states what the purpose of their role is or was rather than what they have accomplished, the impact they had, how the company is better for having them in the role, and why they would make a good candidate for our company or client.”

Good resumes are an introduction to the candidate and form a first impression. “They will be passed over in deference to someone who takes the time to do it right,” he added. A good resume, he said, starts with a two to three sentence overview of the opportunity they are seeking and then quickly transitions to their current or most recent role. “Depending on the length of time in the role or company, they should have three to five bullet points showing their impact. Each bullet will describe a challenge, the action they took and the result achieved. Each successive role will have two to three bullets and will demonstrate increased performance, responsibility and capability.”

The resume survey was conducted in April. A total of 1,815 executives responded.

Check Out These Related Articles On Attracting Top Talent: