Menu
View our Events
Stay Connected:
A new report from Upwork says that the rapid adoption of remote work has sparked a fundamental shift creating drastic spillover effects in how businesses operate and manage their workforce. Nearly 28 percent of hiring managers surveyed expect their organizations to be fully remote in the next five years, up from 23 percent in Upwork’s November 2020 survey. 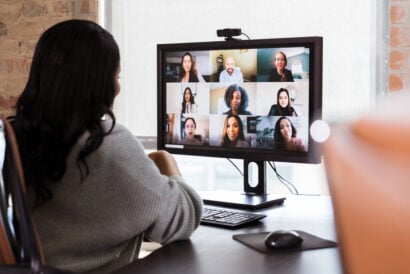 October 21, 2021 – The rapid adoption of remote work over the last year and a half has sparked fundamental changes for businesses far beyond where their workforce is located. With 40.7 million Americans expected to be fully remote in the next five years, it has also been a catalyst for a fundamental, tectonic shift creating drastic spillover effects in how businesses operate and manage their workforce, according to a recent report from Upwork’s chief economist, Adam Ozimek. Using Upwork’s Future Workforce Survey, a representative survey of 1,000 U.S. hiring managers, the company detects early signs of the changes taking shape that will impact businesses for decades to come.

The report found that remote work projections are strong. With 40.7 million American professionals, nearly 28 percent of respondents, say they will be fully remote in the next five years, up from 22.9 percent in Upwork’s last survey conducted in November 2020. Sixty-seven percent of businesses reported that there were many more changes to long term management practices than in a normal year, excluding temporary adaptations to the pandemic. As a result of the pandemic, over half, 53 percent, of businesses say that remote work has increased their willingness to use freelancers. In addition, 71 percent of hiring managers plan to sustain or increase their use of freelancers in the next six months.

Full-Time Remote is the Big Change

“Although there is universal agreement that companies are making long-term plans to continue embracing remote work in larger numbers than before the pandemic, there is still debate around the full extent to which workplaces will remain remote,” said Dr. Ozimek. “Specifically, will firms mostly utilize a fully remote model, or will they adopt a hybrid approach that requires workers to come into the office a few days a week? This question is an important one, as it helps to delineate the types of lasting changes that companies will make. It is also an indicator of evolving business management trends, including the location of their workforce, but also general management principles used across the business.”

Adam Ozimek is chief economist at Upwork. He drives the company’s growing body of research and public data releases to help better understand labor market trends and inform future of work discussions. Dr. Ozimek is an expert in the function of labor markets and produces research in a broad array of economics fields, including  demographics, monetary policy, and immigration.

The growing embrace of fully remote work means changes to the way we work that go far beyond the physical location of workers, according to Dr. Ozimek. Remote work represents what economists call a general purpose technology, which is a technology with a wide range of uses that is embraced across the economy and creates a variety of spillover effects. The data already suggests remote work will be embraced throughout the economy in the long-run; the question then is whether this will generate spillovers.

“History is filled with examples of these spillover effects of general purpose technologies, and shows how they can drastically transform how businesses operate,” said Dr. Ozimek. “For example, electrification did not just allow retail stores to replace gas lighting with electric lighting. Instead, electric lights, elevators and fans enabled customers to easily explore beyond the ground floor of retail stores, which in turn ushered in the era of grand department stores.”

What will the spillovers of a more fully remote labor force be?

The Future Workforce Report shows signs of broad changes to business operations that one would expect to accompany a general purpose technology. For example, 26 percent of businesses reported that there were many more changes to long-run management practices than in a normal year, excluding temporary adaptations to the pandemic. Another 41 percent said that there were somewhat more changes than normal.

“Taking a more granular look, we can see that these management changes are broad, affecting nearly every aspect of how a business operates,” said Dr. Ozimek. “These are not typical changes, for example, when an organization hires a new leader or a specific division or team experiences a reorganization; these include changes in how leadership is structured. Over half of all businesses changed strategic planning. Similarly, a significant share of firms altered how they onboard and train, recruit and even deliver their performance reviews.” Even the basics of how companies and organizations communicate shifted, with 60 percent making changes to team meetings, and over half making changes to internal communications.

Overcoming the Challenges of Remote Work
Remote work being the new normal is posing new challenges for local companies. With the ability to work from almost anywhere, diverse talent and highly skilled professionals are being outsourced to companies all over the globe. Talent acquisition professionals are seeing large brands such as Amazon, Facebook, Microsoft and Starbucks converting traditionally onsite positions to remote. Local businesses could be losing their local talent to global enterprises because of this change.

“Although remote work provides employees with the benefits of a more flexible working environment and a better chance at securing their dream job, the competitive online space can make it hard to secure a position,” said Talento Human Capital Management (TalentoHCM) in a new report.

Alongside the changes in managerial style, the pandemic also stimulated changes in the use of software, according to the report. The embrace of Zoom and other video conferencing software is well-understood and well publicized, but the changes go well beyond video communication tools. Managers also looked to corporate management software and project productivity software. The ability to asynchronously collaborate and communicate on work, track progress, and assign action items all became increasingly important for businesses across industries.

“Most importantly, these long-run changes won’t be put back in the box once the pandemic is over,” Dr. Ozimek said. “As business operations are molded by remote work, remote work becomes an even more deeply ingrained part of business.”

Work Outside the Firm

Another way that we can already see remote work culture taking effect is in the use of freelancers. Because remote work enables employees to work together at a distance, another spillover of remote work is that it also makes it easier to collaborate with professionals outside the firm, according to Dr. Ozimek. “Prior to remote work, an impediment to having work done outside the firm is the status quo of collaborating in person,” he said. “When work is done exclusively in person at a centralized office, it is more difficult for outside firms or freelancers because doing so would require them to travel to another company’s offices every day. Our research provides evidence that remote work enables collaboration between firms and those outside the firm, specifically freelancers and outside services, like consulting agencies and accounting firms.”

“To start, it is useful to understand freelancing and outside services as being in some ways substitutes for a firm,” Dr. Ozimek said. “Both represent a desire for someone other than a firm’s employees to do work.” The survey asked about the percent of work that was done by employees, freelancers, or outside services in fifteen different work areas. The averages by work area show that the kinds of work that tend to be freelanced also tend to be performed by outside services. For example, IT and networking, web/mobile/software development, and design and creative are among the top three work areas for both the share done by freelancers and the share done by outside services. “This suggests that a common factor drives demand for both: an underlying comfort with and desire to have some work done outside the firm,” Dr. Ozimek said. “Sometimes this work is done by other companies, sometimes by freelancers.”

Remote work by itself is a big change in how we work and is the subject of much discussion, but the spillover effects merit close attention as well. “General purpose technologies have historically been drivers of economic growth and major changes to how we live and work,” said Dr. Ozimek. “Already, the data is showing spillovers in management practices and signs that businesses are increasingly able to collaborate with those outside the firm with greater ease. While much remains to be seen, the case for remote work as a driver of productivity going forward is strong.”