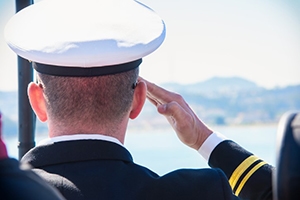 NPS wanted a leader with the demonstrated ability to foster and encourage a program of research in order to sustain academic excellence, said the search firm. Dr.  Rondeau proved to fit that bill.

“Dr.  Rondeau brings with her an unparalleled record of leadership and achievement as a university president, change agent, officer and leader,” said Richard Spencer, secretary of the Navy. “At every level, she’s been a champion for students, teachers and cutting-edge research and I am confident she is the right person to build on the great evolutionary work that’s been done so far and to take this institution, and the Naval enterprise it serves, to the next level.”

Dr. Rondeau was previously the president of the College of Dupage, the second largest school in the state of Illinois, with more than 28,000 students. As a 38-year Navy veteran, she retired as a vice admiral and earned four Legion of Merit awards, two Defense Distinguished Service Medals and the Navy Distinguished Service Medal. Dr. Rondeau also served as president of the National Defense University.

“Dr. Rondeau has provided a tremendous amount of leadership during her tenure at College of DuPage,” said Deanne Mazzochi, chairman of the college’s board of trustees. “We have long known that other colleges and universities found her accomplishments here attractive. We are saddened that she will leave the College of DuPage at the end of the year, but understand that her duty to the Navy and country she loves so well must come first, and we support her in that mission.”

In her new role, Dr. Rondeau serves as the senior executive leader responsible for the execution of the school’s mission, which is to provide relevant and unique advanced education and research programs to increase the combat effectiveness of commissioned officers of the Naval Service and to enhance the security of the U.S., said the search firm. She reports ultimately to the secretary of the Navy and has full responsibility for the leadership, management and governance of the school and its research activities.

Located in Monterrey, NPS is a graduate and research-intensive university offering master’s and doctorate degrees in the sciences, business, engineering, and international and security studies. Students include military officers from all U.S. armed services, Department of Defense civilian employees and military officers from over 100 nations. NPS faculty have made fundamental contributions to national security through basic and applied research in traditional academic disciplines and in non-traditional and interdisciplinary areas uniquely designed to serve the defense and national security of the U.S. and its allies.

Become an Inmail Sponsor
Hunt Scanlon Media offers a number of unique and exclusive ways to reach our coveted audience of talent acquisition leaders. Becoming an inmail sponsor gives you an opportunity to brand your firm via direct email to tens of thousands of our followers.

NPS also advises the Department of Defense and many federal agencies. The school provides experimental and demonstration platforms for meeting a wide variety of exigent military challenges. Research is conducted at both classified and unclassified levels.

Reffett Associates, based in Bellevue, WA, is a nationally recognized executive search firm. The boutique talent provider has extensive experience in retail and consumer packaged goods, private equity, commercial & federal services, government sectors and associations and non-profits. Its team is made up of executives with tangible industry experience, possessing real world, relatable knowledge about the challenges executives face in managing talent in a competitive marketplace.

Marshall Reffett joined the search firm after having worked for U.S. Rep. Dave Reichert of Washington State. Mr. Reffett served as a legislative assistant to the congressman, advising him on legislation relating to financial services, small business, housing, consumer affairs, government oversight & reform, defense, veterans, foreign affairs and transportation. He helped to position the congressman as a leader on global health issues, working with organizations such as UNICEF, Save the Children and the U.S. Global Leadership Campaign.

Mr. Young brings 13 years of federal legislative, policy and constituent services experience. As district director and counsel for Rep. Reichert, he oversaw constituent services, casework and was the district office policy lead for business, energy, environment and transportation issues. Mr. Young assisted the chief of staff in managing and directing the district office and managed the congressman’s Wenatchee, Washington office. As the lead on a variety of projects and advisory groups for the congressman, including trade, small business, clean technology and maritime, Mr. Young has extensive knowledge of these industries.