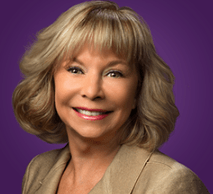 Pam Davis is Of Counsel to Quick Leonard Kieffer, bringing four decades of experience in highly successful hospital and health system leadership.  She is renowned for her visionary, transformational, and inspiring leadership, as well as for her integrity and ability to engage and build relationships.

Pam began her career as an assistant administrator at Lutheran General Hospital in Park Ridge; she then spent nine years at Christ Hospital and Medical Center in Oak Lawn, ultimately rising to the role of chief operating officer.  Pam joined Edward Hospital in Naperville as its chief executive officer in 1988, armed with a desire to transform the small community hospital into a regional healthcare leader.  During her 29-year tenure, she helped build Edward-Elmhurst Health into the system it is today – encompassing Edward Hospital, Elmhurst Hospital, and Linden Oaks Behavioral Health, with more than 100 outpatient locations across a service area of 1.7 million residents in the west and southwest suburbs of Chicago; a 2,000-physician medical staff; almost 8,500 employees; and revenue of $1.3 billion.  The era of Pam’s leadership of Edward, and subsequently Edward-Elmhurst Health, was one of dramatic growth, in which she created new service lines, achieved Magnet Status for Nursing Excellence, implemented creative new patient amenities, formed mutually beneficial affiliations, founded an ACO, led construction and M&A projects, and effected a cultural transformation.  She retired from Edward-Elmhurst Health in 2017.

Over the course of her career, Pam has been honored by Chicago Health Executives Forum (CHEF), the largest independent chapter of the American College of Health Executives (ACHE), with its prestigious Career Achievement Award.  She has been named “Woman of the Year” by the local chapter of the American Association of University Women, and was previously honored by CHEF/ACHE with the 2015 Recognition Program Service Award and 2009 Healthcare Leadership Award.   She has been recognized numerous times by Crain’s Chicago Business and Becker’s Hospital Review as a top healthcare leader, both locally and nationally.

Pam is a Fellow of the American College of Healthcare Executives (and a delegate of the Section for Health Care Systems); a previous member of Regional Policy Board 5 for the American Hospital Association; a member of the Sanford International Healthcare board; a previous at-large trustee for the Illinois Hospital Association (where she serves on the Transforming Illinois Healthcare Task Force); a previous board member for the DuPage Regional Development Alliance and Choose DuPage; and a member of the board for Alert MD. She holds a bachelor’s degree in economics/social studies and a master’s degree in hospital and health services administration from the University of Iowa.