Chair of M & A Services 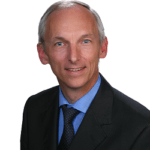 Gerhard Benneck, founder and manager of the company is an American national. He grew up in Germany, France and the United States, thereby speaking all three languages (albeit French is a bit rusty).

Moving back to Europe (Luxemburg), he started his career in the banking industry. He quickly moved into currency trading and then into consulting. From there he moved into sales, at first selling the consulting services of the bank, later selling software applications for currency and options trading.

In 1988 he moved back to German and moved into recruitment, starting his own company in the field of Executive Search. In the mid-1990ies Gerhard also started work in the field of Mergers & Acquisitions which culminated in him writing a practical book on the subject which became a Financial Times Germany bestseller.

Gerhard lives in Langenfeld, a small community halfway between Düsseldorf and Cologne. He is married and has three children of which only the youngest is still at home. In his spare time he enjoys Tennis, Skiing and other sports of all kinds. He is also active in his church, taking a leading role there.