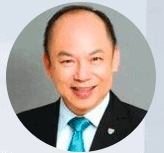 Prior to contributing to the field of Executive Recruitment consultancy from the 1990s, and subsequently founding Rubicon Int’l Talent Exchange (which is now the Singapore office of Cornerstone International Group), Edwin was the General Manager of an Infrastructure Engineering firm where he initiated, spearheaded and achieved the goal of upgrading the firm’s national certification for large value projects.

He was able to do this by leveraging on his career experiences in the construction industry that started in 1984, when he began as a site foreman for Shimizu Construction Co., Ltd a large Japanese multinational. Having armed himself with first-hand industry experience, Edwin then left for England, the United Kingdom, to pursue higher educational qualifications.

Subsequently, he joined TradeArbed Pte Ltd, a Luxembourg-based multinational. Being responsible for the technical and technical sales aspects of the structural steel products of the company, he had the opportunity to engage in various national and iconic projects such as the Central Expressway Tunnel, Suntec City and Tuas Naval Base.

Since then, his broad career capabilities have enabled him to contribute to industries in the furniture retail, interior outfitting and exhibitions & events sectors. These portfolios served to hone his general management, business development, sales & marketing, account servicing, production & assembly, logistics and project leading skills.

These were capacities where he often had bottom-line responsibilities and change management mandates to re-engineer businesses to strive for maximum profitability and service excellence.

Additionally, with a foundation as a Certified Professional Behavioral Analyst, he conducts career management, development and transition counseling from an individual, face-to-face session to a group level, stand-up type facilitation and training.

Academically, Edwin possesses a Bachelor of Engineering (Civil Engineering, First Class Honours) degree, majoring in Geotechnical Engineering, from the University of Newcastle-on-Tyne, United Kingdom. He is also an MBA graduate, specialising in Business-to-Business Marketing, from the University of East London. He completed his National Service contribution to the Singapore Armed Forces in November 2003 and last served as a Captain in the Operations Branch of an infantry command. He contributes to voluntary, religious and community areas, such as, helping in the local church and residential management council, and currently serves as a Member of the Board of Global Cultural Alliance Limited, a not-for-profit charity; and Member-at-Large, Asia Pacific and Middle East Council, AESC.