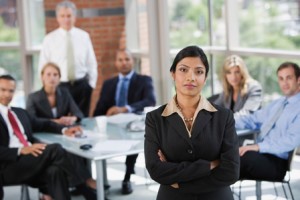 October 5, 2015 – Here’s the good news: More women joined S&P 500 boards during the 2015 proxy year. The bad news: It came at a grudging pace, this according to data released from the Spencer Stuart Board Index. Thirty-one percent (117) of new independent directors were women – not bad until you see it is an increase of one percentage point – representing just seven more women than in 2014.

With turnover of S&P 500 boards averaging about seven percent annually and women representing less than a third of those new directors, you begin to see that changes in the composition of boards is likely to be slow. Painfully slow.

“These are appalling statistics, no matter how you slice them,” said Scott A. Scanlon, founding chairman and CEO of Greenwich, Conn-based Hunt Scanlon Media, which tracks the executive recruiting industry. “We should all be alarmed at the lack of real progress.”

What’s worse, meanwhile: a survey of corporate secretaries conducted as part of the Spencer Stuart research report shows a decline in the number of boards prioritizing the recruitment of women.

“Given the current pace of turnover, it will take a long time before we see meaningful progress. Particularly when boards limit the pool of new directors to CEOs, women will have fewer board opportunities,” said Julie Hembrock Daum, head of Spencer Stuart’s North American board practice. “Increasing the presence of women on management teams, corporate boards and board leadership roles requires a multi-front effort. That’s why our work with the WCD Foundation is so important.”

It was just this summer that research released by rival Heidrick & Struggles indicated that progress for women in boardrooms within the Fortune 500 was accelerating. Of the 339 new directors appointed in Fortune 500 boardrooms last year, 99 were women, representing 29.2 percent of the total. That compares with 25.9 percent in 2013 and 22.8 percent in 2012. The Heidrick & Struggles Board Monitor projects that women will account for 50 percent of new board directors in the Fortune 500 in the U.S. for the first time in 2024 — nine years from now.

Not to be outdone, global talent provider Egon Zehnder has itself set out to boost the number of female chief executives of the U.K.’s top 100 companies to 25 by 2025. Zehnder, which advises roughly half of the U.K.’s FTSE 100 companies on succession planning and recruitment, reports that only nine percent of top executive jobs at British companies are filled by women. The firm launched its ‘25 by 25′ drive about 10 months ago. Today, just five female executives run FTSE 100 companies.

And other action is being undertaken. There are a number of global initiatives underway to mobilize efforts to increase women board representation:

A national campaign to increase the percentage of women on U.S. company boards to 20 percent or greater, by 2020, is underway by an organization aptly named 2020 Women on Boards.

Overseas, the 30% Club has helped increase female participation on boards by offering mentoring and convening working groups to share best practices on board diversity. Its target is to bring FTSE 100 board membership representation of women to 30 percent by the end of this year (the number stands at just under 24 percent).

The Diversity Action Committee, formed to build up the representation of women directors on boards of companies in Singapore, has signed up more than a dozen leading executive recruiters to help expand directorships to women.

But a wider view of board diversity, looking beyond just white females, is sobering:

The percentage of Hispanics recruited to boards in 2014 remained unchanged from 2013: five percent. In the past six years the percentage has never exceeded 5.4 percent. Yet the U.S. Census Bureau reports that 54 million Hispanics live in the U.S., representing 17 percent of the population.

“Securing enough directorships for women to make this a truly competitive — and fair – environment is tantalizingly close, but it remains elusive,” said Mr. Scanlon. “At the end of the day, from what Spencer Stuart is telling us, it looks like another year has passed and with it another missed opportunity.”

Spencer Stuart and the WCD (Women Corporate Directors) Foundation teamed up earlier this year to launch a series of global actions aimed at bringing more women, and diversity, into boardrooms. Initiatives include efforts to bring more female candidates to the attention of board nominating committees and to help women aspiring to board roles position themselves for board service opportunities.

“We want to accelerate corporate governance globally, and one of the best ways is to recruit more women. Study after study show women make boards more effective,” said Susan Stautberg, WCD Foundation chairman and CEO. “At the same time, we are creating a powerful community of women globally who are exceptional, thoughtful, and influential board members and are ideal candidates for further board opportunities.” The WCD Foundation, the largest membership organization of women on boards, has 70 chapters globally, with more than 3,500 members serving on 7,000 boards.

Check Out These Related Board Director Articles: