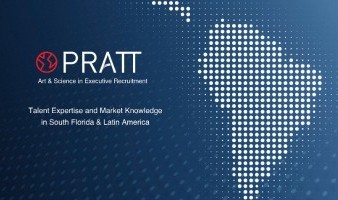 March 14, 2016 – Boutique executive search firm PRATT has appointed José G. Hernández as managing director in its new Miami office. In this role, he will leverage his experience and relationships in the region to fill executive search needs of businesses in the area.

“Bringing our expertise in finding and developing high potential talent, combined with our know-how of the region, is a tremendous opportunity to set the practice of executive search apart from the traditional approach by working with transparency, respect and speed with candidates, established companies and fast growing organizations in the region,” said Mr. Hernández.

Mr. Hernández was previously senior vice president of human resources, Americas, at DHL Express. Prior to that, he was VP of HR for Latin America at Wal-Mart International and VP of HR at the Coca Cola Company in Brazil and Atlanta. He follows a number of senior level HR professionals who have joined the ranks of search firms in recent months, including: HR veteran Michael A. Biondolillo, who signed on with Salveson Stetson Group as senior vice president. Most recently, he served as SVP of HR for Henkel Corporation – Americas; John Budriss, who settled in with Sheffield Haworth as executive director – corporate officers in the firm’s technology practice. He most recently ran all talent acquisition for Bloomberg and was chief human resources officer (CHRO) leading talent and people-related activities for Bloomberg’s enterprise division. He formerly served as global head of talent acquisition at Thomson Reuters; and top talent acquisition leader, George Hotter, who joined Summative Executive Search as a recruiting consultant. Mr. Hotter previously served as worldwide talent acquisition leader at IBM, where he led worldwide talent acquisition activities for the company.

Search firms have been expanding throughout Florida in recent months. The city is a major center of commerce and finance and boasts a strong international business community. Because of its proximity to Latin America, Miami serves as the headquarters of Latin American operations for more than 1,400 multinational corporations, including AIG, American Airlines, Cisco, Disney, Exxon, FedEx, Kraft Foods, LEO Pharma Americas, Microsoft, Yahoo, Oracle, SBC Communications, Sony, Symantec, Visa International, and Wal-Mart. The city has a gross metropolitan product of $257 billion and is ranked 20th worldwide in GMP, and 11th in the U.S.

PRATT is an executive search firm focused on the middle and top management talent segments in the South Florida and Latin America region. The firm operates in coordination with its parent company Pratt Pinet, which is based in Buenos Aires and is led by partners Pablo Rodríguez de laTorre and Esteban Calvente, who have over 25 years of experience in executive search in Argentina and Latin America.

PRATT and Pratt Pinet are partners of INAC, an independent search association with over 80 member offices in 45 countries — spanning Europe, Americas, Asia, Africa and the Middle East.

Check Out These Related Articles On Search Firms Expanding In Florida: