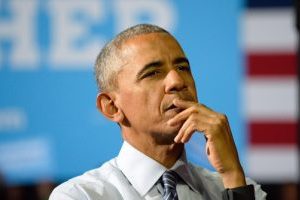 Ms. Bernard is looking to play a crucial role in helping former President Barack Obama and former first lady Michelle Obama firm up and design the programming “narrative” of the museum, a project that has been underway for months.

More specifically, Ms. Bernard plans to take advantage of the museum’s unusual interpretation of the traditional presidential library model. She wants to position the museum as the first point of entry to the Obama Presidential Center and ensure it is a welcoming and appealing space and experience. She is also charged with providing a dynamic and authentic vision for the museum, taking the curatorial lead in defining the scope and direction of the institution’s exhibitions and public programming.

Ms. Bernard, in partnership with key volunteer leaders and staff, is responsible for developing and executing a strategic plan for the museum that will capitalize on the strengths of the foundation and the community as well as on what has already been achieved. She will lead marketing and audience development strategy on-site and online to introduce the museum to local, regional, national and international audiences, and create a financial and fundraising plan.

Ms. Bernard previously served as director of exhibitions at the New York Public Library, a position she held since January. Before that, she was part of a team developing the exhibits at the National Museum of African American History and Culture on the National Mall. Before that, she was curator of prose and drama for the Yale Collection of American Literature at the Beinecke Rare Book and Manuscript Library at Yale.

David Simas, CEO of the Obama Foundation, said the museum will need to inspire people to take on the world’s biggest challenges. “We are excited for Louise to join our team and help us develop a museum that is active and engaging,” he said. “Louise’s impeccable credentials and passion for her work will make her a valuable member of the Obama Foundation team.”

Mr. Bernard said he was excited to have the chance to help guide and shape the museum. “I look forward in bringing President and Mrs. Obama’s remarkable story to the broadest possible audience, and to highlighting the crucial role of civic engagement in a way that is meaningful and inspiring to local South Side residents, and to people across the country and around the world,” he said.

The firm recently recruited senior leaders for other non-profit organizations, including Matthew Teitelbaum as executive director of the Boston Museum of Fine Arts; Salvador Salort-Pons as director, president and CEO of the Detroit Institute of Arts; Linda McNeil Tantawi as CEO for the Greater New York City Affiliate of Susan G. Komen for the Cure; and Judy Harris Kluger as executive director of Sanctuary for Families. The firm was also recently picked by the Apollo Theater to lead its search for a new executive producer. Executive search consultant Sandi Haynes is leading that search.

Ms. James has been recruiting for local, national and international non-profit institutions and corporations since 1996. She has recruited executives for leading aide, advocacy, cultural, education, environmental, faith-based, healthcare, philanthropic and social service institutions.

Ms. Klein has combined search experience with the arts during her professional career. She has conducted searches for the Metropolitan Opera, the Animal Medical Center, GMHC (Gay Men’s Health Crisis), Lincoln Center, Baltimore Symphony Orchestra and the Wildlife Conservation Society.