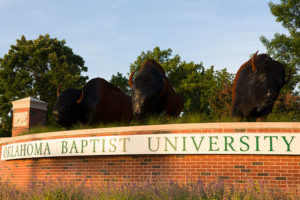 June 10, 2019 – As the academic year winds down, a number of universities across the country are looking to install new leaders. Oklahoma Baptist University (OBU) recently tapped CarterBaldwin Executive Search to find a new president after David W. Whitlock announced his retirement. The search is being led by consultant Debby White and founding partner Price Harding.

Representatives from CarterBaldwin visited the Oklahoma Baptist University campus for two days in May to meet with the presidential search committee, the board of trustees and groups of faculty and staff to develop a list of qualities they wanted in the school’s next president.

Oklahoma Baptist wants someone who will bring an exciting vision of the future to the university. The new leader will be expected to bring new energy and ideas to the university while at the same time remaining faithful to its founders’ vision of preparing students “to change the world, to serve Christ and His church and to serve with distinction in their fields of expertise.”

“This new president needs to be committed to the Great Commission and to the Great Commandment and see OBU as an expression of those mandates,” the search firm said. “He or she needs to value the Christian liberal arts tradition and be committed to maintaining OBU as a nationally recognized institution with high academic standards and a high degree of student engagement.”

The school’s next leader will be expected to demonstrate a vibrant faith with a broad evangelical outlook as an active member of a Southern Baptist church. The right candidate will have an “affinity for Oklahoma (Midwest) culture and a willingness to embrace I,” said Carter Baldwin. “They will bring a proven track record of success in higher education administration with experience in leading a team.”

Oklahoma Baptist University is a private Baptist liberal arts university in Shawnee, OK. It was established in 1910 and is owned by the Baptist General Convention of Oklahoma. Offering 10 bachelor’s degrees in 88 areas of study, five master’s degrees, and eight certificate programs, students learn how all knowledge connects and how that framework can be informed by a thoughtful Christian worldview.

Ms. White is a consultant in CarterBaldwin’s non-profit and higher education practice. She focuses on university president, cabinet and officer level executive searches. Prior to working in search, she spent 25 years in higher education in a variety of vice president and senior leadership roles.