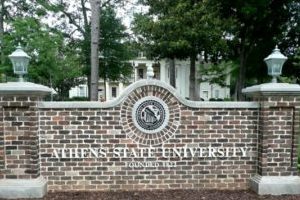 April 16, 2019 – In a search spearheaded by education-focused executive recruiter Academic Search, Athens State University in Alabama has narrowed the choices for its next president to four finalists. Senior consultants John W. Garland and Eric Richtmyer are leading the assignment for the Washington, D.C.-based search firm.

The finalists were selected by the university’s presidential search committee after reviewing all applicants and completing in-person interviews with the top 10, said the university. The four finalists were expected to visit the school this month for further interviews. The executive committee of the board of trustees is expected to make a hiring recommendation to the board on May 17.

“It is our goal to select the most appropriate candidate that will benefit both the institution and the community,” said Dr. Ingle, who also serves as search committee chair. “We were fortunate to have a large applicant pool of very qualified candidates. We are optimistic that the candidate selected will build on the momentum that has been created and be an asset to the institution’s future.”

The new president is expected to begin duties this fall.

“The role of our consultants is not to select our next president, but rather to support and inform the work of the search committee and to help ensure that the search and selection process is managed effectively so that we may achieve our goal of securing the best possible president,” said the university.

Academic Search is currently conducting, or has completed, senior assignments for Walsh University, University of Pittsburgh at Greensburg, University of Central Missouri, Fort Hays State University and SUNY Empire State College, among others.

Before joining Academic Search last year, Mr. Garland served as executive chair of TM2 Education Search, which was established as an initiative of the Thurgood Marshall College Fund to identify and place candidates in top administrative posts at historically black colleges and universities. He began his career in higher education in 1988 as general counsel for the University of the District of Columbia. In 1991, he was named associate general counsel for the University of Virginia, where he became assistant to the president in 1993. Four years later, he returned to his undergraduate alma mater, Central State University as president. Mr. Garland retired from Central State in 2012.  In 2013, he was named president-in-residence at the Thurgood Marshall College Fund before helping to launch TM2 in 2016.

Dr. Richtmyer joined Academic Search in 2014. Prior to joining the firm, Dr. Richtmyer taught at the Maryland Institute College of Art, Colorado Mesa University, Concordia University-Saint Paul and the University of Minnesota. Additionally, he has served as a project manager at the Association of Governing Boards of Universities and Colleges, where he coordinated the development AGBU, an online web portal for disseminating best practices related to higher education governance.