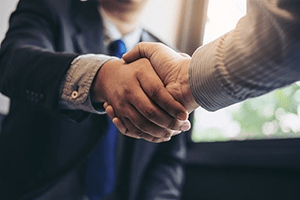 October 9, 2018 – Executive search firm Odgers Berndtson has continued its recent expansion by partnering with JDR Consulting. Founder John de Regt, who has more than 30 years of executive coaching and search experience, is expected to enhance the firm’s leadership service offerings in the U.S.

“John is an exceptionally talented and experienced executive coach,” said Steve Potter, CEO of Odgers Berndtson U.S. “With his unique matrix of experience and education, John’s presence will significantly expand our leadership, executive assessment and development (LEAD) capabilities. Together with the rest of the North American team — Robert Satterwhite and Lisa Tromba in the U.S., and Eric Beaudan in Canada — we look forward to continuing the expansion of our LEAD services,” he said.

Mr. de Regt founded JDR Consulting in 2010. A graduate of the Hudson Institute’s Coach Intensive Training program and its Master Coach program, he is certified in the administration of the Hogan Personality Inventory and the EQi 2.0 emotional intelligence tool, and carries the professional certified coach certification from the International Coach Federation. He specializes in helping senior executives improve their leadership skills and the performance of their business units.

During his 25-year career in executive search, Mr. de Regt specialized in the aerospace, airline and industrial sectors, and was a partner at Spencer Stuart, Heidrick & Struggles and Russell Reynolds Associates. Mr. de Regt earned his bachelor’s degree in economics from Dartmouth College in 1972, having attended with a full Navy ROTC scholarship. He is the board president of Warfighter Advance, a not-for-profit that helps veterans of all wars manage post-traumatic stress without the use of pharmaceuticals. For the past 12 years, he has been a member of the Five Mile River Commission, having been appointed by the governor of Connecticut.

Odgers Berndtson has seen a wave of growth in recent months. In August, the firm hired Nicole Phillips as a partner in the firm’s retail and consumer practices. Ms. Phillips joins Odgers from DHR International, where she was a partner in the global retail & consumer practices. She recruits across a range of functions with an emphasis on marketing, merchandising and digital.

In May, the firm expanded in western Canada with the appointment of Stephen Diotte to partner and head of leadership services for the western region, as well as the firm’s new Canadian energy sector expert. Mr. Diotte has deep consulting experience in working with leaders globally around talent and organizational strategy and redesign, specifically focused on the energy sector. He was most recently an associate partner at McKinsey & Company in Calgary.

Check Out These Related Articles On Partnerships: