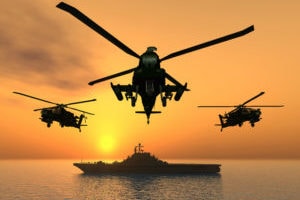 October 3, 2019 – Building on a period of unprecedented expansion, global search firm Odgers Berndtson has named Jon Barney as a partner and head of its just launched aerospace, defense & national security practice. Mr. Barney, who has more than 20 years of executive search, leadership development and management consulting experience, will be based in the firm’s Washington, D.C., office.

The practice builds on the firm’s strong existing relationships in the industrial, aviation, technology, and government sectors and broadens its global reach. In leading the practice, Mr. Barney will bring to bear his deep industry expertise to address the most pressing strategic talent requirements facing senior leaders in the global aerospace, defense and national security sector.

Mr. Barney will lead the expansion of the business and build on the reputation and expertise of the Odgers Berndtson aerospace, defense & national security practice in London, led by Clare Glackin.

“Jon is one of the most successful and widely respected aerospace, defense and national security professionals in North America,” said Steve Potter, CEO of Odgers Berndtson U.S. “As a global team, Jon and Clare bring an unparalleled level of industry and executive search experience to a global security market that demands great talent. We identify the leadership needed to drive private sector innovation to answer our most pressing national security requirements,” he said. “Jon’s addition hugely bolsters our aerospace, defense & national security expertise, and we are delighted to welcome him to the Odgers team.”

“I am very excited to join Odgers Berndtson,” Mr. Barney said. “I was drawn to their existing entrepreneurial and innovative culture, their small teams with deep industry expertise, the firm’s data driven approach, and their desire to transform and modernize executive search and talent.”

Before joining Odgers Berndtson, Mr. Barney was a senior partner at Korn Ferry where he advised aerospace and defense clients. Previously, he was a managing director at Avascent, a strategy consulting firm that focuses on government markets, where he oversaw strategy, consulting, and M&A engagements for aerospace defense, government services, and technology clients. Mr. Barney also served as an executive director in the aerospace and industrial practices at Russell Reynolds Associates and was an associate at Booz Allen Hamilton. Earlier in his career, Mr. Barney served five years as a surface warfare officer in the U.S. Navy.

Odgers Berndtson has recently experienced a wave of growth. In June, the firm inked a new partnership in France with the addition of Singer & Hamilton, a 30 year-old search firm that specializes in executive search and executive assessment with strong expertise in financial services, life sciences, technology, industry, fashion, luxury and private equity. Singer & Hamilton immediately changed its name to Odgers Berndtson France and will work directly with all of the firm’s entities, but will focus its attention on its largest European offices based in Germany and the Netherlands.

In August, Odgers named Maureen Ryan as a partner in its healthcare practice. She leads the firm’s U.S. health systems team. A former international health systems executive, Ms. Ryan works with boards and executive teams to custom-build comprehensive talent strategies. She will also be a member of Odgers Berndtson’s board and CEO practices. She is based in the firm’s Washington, D.C. office.

Last spring, the firm named Jamie Crittenberger as a partner in its U.S. sports practice. He is based in Washington, D.C. Mr. Crittenberger joined Odgers from Spencer Stuart, where he was a member of that firm’s global consumer practice and co-leader of its North American sports business practice.