Menu
View our Events
Stay Connected:
When it comes to understanding how mentoring operates – let alone how it could be harnessed to develop and retain talented people – most executives have little grounding in data or experience beyond their own. A just-released report by Heidrick & Struggles sheds new light on the topic. 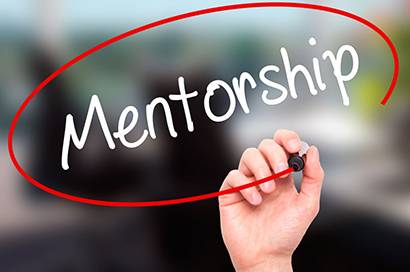 January 8, 2018 – Few executives would deny the powerful role that mentorship plays in providing opportunities for personal and professional development. Indeed, most have experienced these benefits firsthand. Yet when it comes to understanding how mentoring operates – let alone how it could be harnessed to support, develop, and retain talented people – most of those same executives have little grounding in data or experience beyond their own.

Heidrick & Struggles recently surveyed more than 1,000 professionals about their experience with mentoring, supplementing its online survey with additional, in-depth interviews of 20 senior executives with particular experience in mentoring.

The Heidrick report found that mentorship is generally a positive and impactful experience – particularly for women and self-described ethnic and racial minorities. The report, moreover, highlighted the importance of a personal bond and chemistry in forming an effective mentoring relationship characterized by trust and openness – sentiments that can be challenging to develop informal mentoring programs.

The Heidrick survey found that most professionals have had more than one mentor and that most of these relationships are not a career-long commitment. Only 34 percent of the respondents reported having had only one mentor so far in their career, while 39 percent said they have had two, and the rest said they have had three or more. The majority (64 percent) of the respondents said their primary mentoring relationship lasted five years or less. Just eight percent said the relationship lasted 15 years or longer.

Sr. Director, Human Resources Wanted at Comcast
This position is responsible for participating in the development of the company and Human Resources objectives, philosophy, and strategic planning in relation to programs and trends in Human Resources management. 12+ years related experience required.  Apply Now!

Sixty percent of the respondents said they formed their primary mentor relationship with a supervisor who continued to provide career advice and support over the course of further roles, the report said. Only nine percent of respondents indicated that they found their mentor through a formal mentoring program, which could be because such programs have been limited.

Minority mentees were more likely than the overall sample to say they participated in the program (74 percent), and they were also more likely to say they found a mentor on their own (25 percent versus 18 percent) – suggesting their organizations could benefit from establishing tools and forums to help them rather than leaving them adrift. Men and women, meanwhile, were generally similar in how they found their mentors.

Sixty eight percent of the report’s respondents were not in management when they formed their primary mentoring relationship, while 88 percent said their mentor was in a management position. Minority respondents were more likely to say they formed their primary mentoring relationship when they were in middle management (15 percent versus nine percent of the overall sample) and that they are currently in middle management (29 percent versus 19 percent).

Fifty six percent of the respondents said their primary mentoring relationship came about because they aspired in their own career to reach a similar point as their mentor; this rationale was consistent across genders and ethnicities. Another 47 percent of the overall respondents said they were seeking a sounding board for advice and decisions, 40 percent cited situational similarities and 34 percent said it was because they shared a similar background with their mentor. Men were more likely than women to say they engaged their mentor because of similar backgrounds (37 percent versus 31 percent).

Ten of the top 12 responses reflected that mentees were seeking advice of some kind. The other two (“Alerting me to opportunities inside my firm” and “Directly connecting me with others who could help to advance my career”) may be more appropriately deemed sponsorship, which is when a senior colleague advocates for someone’s career advancement directly, said Heidrick.

Heidrick’s survey revealed that men and women tend to gravitate toward mentors who share their gender identity. While 61 percent of all respondents’ mentors were men and 39 percent were women – a finding that likely points to the lack of gender parity in senior management across industries – 84 percent of male respondents reported that their primary mentor was a man and 64 percent of female respondents said it was a woman.

Furthermore, employees who regularly interact with senior leaders are more likely to aspire to be top executives – but, again, women are less likely to have these interactions, said the report. These correlations suggest that companies wanting to improve gender parity across their organization, especially in middle and senior management, might consider using mentoring as an attraction and retention tool, particularly given the report’s finding that women place more value than men on professional feedback and development opportunities in their mentorship relationships.

Heidrick also saw clear differentiators in why minority respondents seek mentorship. Minority mentees were more likely than the overall sample to say they engaged a mentor because of similar backgrounds (45 percent versus 34 percent of the overall sample) and somewhat more likely to say they engaged for networking opportunities (27 percent versus 22 percent) – both of which make sense given that mentees may look to their more experienced cohort for advice on how to navigate an ethnically unbalanced workplace. Mentees, however, may want to be wary of leaning too hard on mentors for networking purposes, said Heidrick, as it could cross the line between mentorship and sponsorship.

Organizations have much to gain by instituting formal mentoring programs, said Heidrick, especially for high-potential talent, women and minorities. At the same time, organizations must embrace the challenge of increasing the effectiveness of these programs and not be lulled into a false sense of security about what the programs are – and aren’t – likely to deliver.

Senior executives can begin by asking hard questions about what actions they are taking to foster a culture of mentoring where strong, collegial and trust-based relationships are the rule and not the exception, said the search firm. Where necessary, companies should support the development of interpersonal skills (including coaching and listening) to foster more effective mentoring.

Companies should also do more to educate employees in the ways that sponsorship differs from mentorship and communicate more clearly about how the company approaches each, said Heidrick. By encouraging debate and discussion around these topics, companies can begin setting more explicit expectations regarding their use. This would help minimize the chances that misunderstandings or mixed signals will undermine the broader goal of creating an environment where open, trusting relationships flourish.

Finally, Heidrick suggested that organizations take its findings as a cue to actively seek opportunities for female and ethnically diverse talent to gain early exposure to senior management, through which so many key interactions take place. Companies that tie mentoring programs to the development of high-potential employees, and make mentoring part of talent reviews and succession planning, will position their employees to live and breathe a culture of mentoring and benefit personally and professionally, said Heidrick.