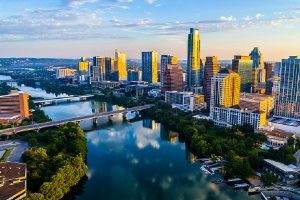 January 31, 2018 – Executive search firm Krauthamer & Associates has placed Randy Clarke as the general manager and president/CEO of Capital Metro in Austin. He replaces Linda Watson, who retired at the end of last year after seven years in the job. Mr. Clarke start his new role in March.

Mr. Clarke, who has a five year contract, will receive a base salary of $285,000, according to the Austin American-Statesman. He will also receive $25,000 a year in deferred compensation. Mr. Clarke will be eligible for an annual bonus of up to 10 percent, said the newspaper.

Capital Metro went through a rigorous search process to ensure the agency found the best possible leader to take it forward. The transit agency took public feedback regarding the search at multiple board meetings since its July announcement, including a special meeting on Sept 14.

In November, board members met with a small number of candidates before narrowing the slate to four finalists. A public meeting with the final candidates was held on Jan. 8. During the past week, Capital Metro has gathered feedback on the  candidates through social media and by email.

“The board broadly speaking was excited about Randy’s experience at the transit authority in Boston, a very large complicated agency, very vibrant,” said Capital Metro board chairman Wade Cooper. “He had tremendous operational, capital project experience there and he went to APTA where he has the chance to know transit professionals from all over the country, possibly all over the world, and really has a good grasp on what’s going on in the industry, the best practices.”

Mr. Cooper told Community Impact Newspaper that Mr. Clarke will bring a lot of energy to the role and could also aid the agency in moving its rail operations forward because of his experience working with federal transit authorities. Capital Metro is in the midst of expanding its MetroRail line with double tracking and building a permanent and larger downtown station to increase frequency.

Mr. Clarke has served as vice president of operations and member services at the American Public Transportation Association since 2016. Prior to that, he spent seven years in various positions with the Massachusetts Bay Transportation Authority (MBTA) in Boston, including deputy chief operating officer and assistant general manager of engineering, maintenance and preparedness, and senior director of security.

While at the MBTA, Mr. Clarke was a key member of the senior leadership team, which provides 1.2 million trips daily. He was featured in Mass Transit magazine’s 2011 “Top 40 under 40” list, which highlights leaders in the transit industry nationwide.

Capital Metro is the Texas state capital’s regional public transportation provider. Established in 1985, it has more than 30 million boardings every year.