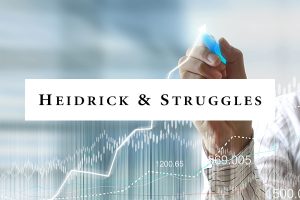 Mr. Thurston, who will start with HS2 in the spring, has 30 years of experience, including leadership roles in the engineering, project and program management and operations environment. Having worked for client, consulting and delivery organizations, he has established a track record across a mix of major organizations and investment programs, with particular expertise in complex environments that require a high degree of collaboration.

Currently, Mr. Thurston is the regional managing director overseeing CH2M’s European operations, which includes those in the U.K. He began his career in the rail industry more than 30 years ago as an apprentice with Transport for London (TfL), before fulfilling a series of roles with The Nichols Group, Metronet and for CH2M since 2008, working on the London 2012 Olympics and Crossrail, where he was lead for the program partner joint venture for three years.

His appointment comes after a five-month global search led by Heidrick & Struggles, which reviewed some 20 potential candidates working on projects in America, Australia and Asia, as well as in the U.K.

“Mark not only knows the U.K. rail industry from the bottom up, but has worked for organizations operating at the highest level globally,” said David Higgins, chairman of SH2. “His grasp of how to manage the transition from page to reality makes him not only the right person to take over at HS2 as we are on the verge of Royal Assent, but also to see it through the years leading up to the first train being commissioned.”

“The challenge is huge in terms of the task and timescale, but the board believes Mark has the knowledge, experience and leadership qualities to deliver the project within the budget we have been given and to do so in a way that recognizes our responsibility both to Parliament and the communities in which we will be operating,” Mr. Higgins added.

HS2 is arguably the most important investment in infrastructure in the U.K. for a generation, which will serve businesses and communities across much of the country. But this isn’t the only country that’s earmarked a major infrastructure investment that involves high-speed transportation ….. Here’s some further reading from Hunt Scanlon Media.

Hyperloop Taps Rosenzweig & Co. for Ambitious Talent Buildout
Hyperloop Transportation Technologies (HTT), a futuristic ground transportation business that claims it will one day ferry people and cargo at nearly the speed of sound, has retained Rosenzweig & Company to lead its search for a number of board and executive level positions.

HS2 is supposed to alleviate the capacity crisis on the railways, which are struggling to cope with the highest number of passengers since the 1920s. The economic benefits of getting business travelers between major cities quickly have been estimated at more than £40 billion.  The boost would come in the form of new jobs, homes and businesses, according to the accountancy firm EY.

HS2 is a dedicated high-speed railway that will connect London to Birmingham from 2026 and then, along a Y-shaped route, to Manchester in the West and Leeds in the East from 2033. It will provide fast, frequent and reliable connections for over 100 cities and towns, including eight of the country’s largest cities.