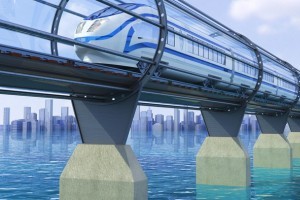 March 21, 2016 – Hyperloop Transportation Technologies (HTT), a futuristic ground transportation business that claims it will one day ferry people and cargo at nearly the speed of sound, has retained Rosenzweig & Company to lead its search for a number of board and executive level positions. Founding partner, Jay Rosenzweig, is spearheading the assignment.

Dubbed the fifth mode of transportation, Hyperloop engineers say their technology will help whisk passengers from Washington, D.C. to New York City in 30 minutes – essentially at the rate of a commercial jet. Plans are underway to start building the first full-scale passenger version in Kings County, CA, next year. A completion date there is set for late 2018.

Hyperloop is one of a pair of like-named companies promising to have their high speed networks up and running within the next couple of years. What’s unique about HTT is that the company works on a crowdsourcing model, with its engineers and designers exchanging their time for equity in the company.

According to CEO, Dirk Ahlborn, Hyperloop has to date signed up nearly 500 engineers and other team members from 21 countries, including current and past employees of Boeing, Tesla, NASA, Facebook, Google, Airbus and Boeing, among others. A looming IPO in 2017 has been rumored.

Rosenzweig & Co. is helping the founders build out an advisory board, a board of directors, as well as a C-level team that includes senior executives in technology, finance, legal, public relations, communications and marketing. Mr. Rosenzweig is looking to connect leaders in science & research, technology, architecture, psychology, politics, business, and entertainment with the company.

“It’s an all-out team effort. We are strategic partners versus simply hired guns, a role we cherish when working with our clients,” said Mr. Rosenzweig. “We are on the verge of hiring CDO, CMO and CTO types, lawyers, PR & communications executives, all people we have introduced to them. The project is still at an early stage for us, but we are moving quickly.” Timing, he said, is always among the most critical factors in recruiting new talent for emerging companies.

Bibop Gresta, deputy chairman and chief operating officer of Hyperloop, said his goal is to have as much of the team as possible in place within six months: “We’d ideally like a chief digital officer to be in place within three months, and we already have some good candidates there. All is on track.” Mr. Rosenzweig said he is moving with “deliberate speed” to find best-in-class leaders. “This search is incredibly unique in that we are participating in an opportunity to not only transform the world of transportation, but in fact to transform the world.”

“Generally speaking, we are looking for candidates with a combination of experience in start-ups and large companies that are able to manage the expansion of the company quickly and efficiently,” said Mr. Gresta. “We need flexible people with the ability to think outside the box and create innovation not only when it comes to the technology, but also in a new way of organizing companies,” he said.

“Jay is working with our team to build an advisory board and fill multiple C-level positions in the areas of safety, legal, digital, marketing and information technology,” said Mr. Gresta, a global expert in finance, transportation, media, mass market community building and project design. He said it was a tall order, and that time was of the essence. Mr. Rosenzweig said identifying suitable candidates has been a “full time mission.”

Mr. Rosenzweig called the executive team at Hyperloop “responsive, practical and very smart – they are exercising good judgment in the decisions they are making, and they’re highly collaborative.” He said he enjoys working with emerging growth businesses because they are focused, practical and results-oriented. “The other thing is, when you place C-level executives into these sorts of businesses, the impact they have is immediate and tangible. Playing a role in making that happen by bringing in precisely the right leaders is extremely gratifying.”

But Mr. Rosenzweig said that transformational businesses can present unique challenges in terms of recruitment.

“One of the paradoxes regarding start-ups, in general, is that they typically benefit from having a hard-driving, entrepreneurial leader – a person with enough self-assuredness to launch a new venture, often against great odds,” he said. When they start to succeed, he adds, this only tends to reinforce their self-image.

“In reality, at some point the leader of a successful, growing company has to accept the fact that she or he cannot do everything – so my job as a lead recruiter can be at times to help these leaders see that the ability to accept help in the form of individuals with complementary skills and new ideas is a strength, not a weakness. Fortunately, the Hyperloop team embraces this concept so this is not an issue at all here.”

Rosenzweig & Co. has placed a number of top-flight global business leaders across a wide array of businesses, including an executive head of programs for George Soros’ Institute for New Economic Thinking; an Asia head of PR and communications for Manulife/John Hancock (based in Hong Kong); the Latin America and Mexico senior legal counsel for Guardian Industries (based in Sao Paulo); chief executives within the portfolio of Kelso & Co. private equity investments, the Canadian Civil Liberties Association, Caesarstone, and Cole Engineering; a CFO for Dream Office REIT; as well as board directors at Kinross Gold, Concordia Healthcare, and CAA.

But, he said, he has also enjoyed “getting deeper into advising emerging growth technology businesses on their build-outs.” Companies he is counseling include Turnstile Live, Hooch, Ignited Network, and Winston House.

Mr. Rosenzweig is also an investor in Rothenberg Ventures, a fast-growing Millennial venture fund that backs business founders who are building technology-enabled, scalable, and primarily asset-light businesses. To date, it has invested in 50-plus high-growth, early stage ventures, including SpaceX, Tile, Angelist, SOLS and Robinhood.

Check Out These Related Articles On Recruiting for Transportation Companies: