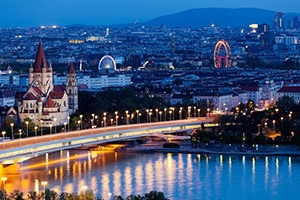 Qualitas is a privately owned executive search and consulting firm.

It becomes the 12th partner for the Kennedy network, which also boasts offices in Paris, London, Copenhagen, Milan, Frankfurt, Monaco, Amsterdam, Denver, Prague and Budapest. Founded in 2000, Qualitas works with a broad range of clients working predominantly in Germany, Austria and Switzerland.

The firm’s focus is on private industrial and manufacturing companies as well as those in pharmaceuticals and technology.

The founder of Qualitas, Roland Wadl, has over 20 years experience in executive search and human resources. Mr. Wadl previously worked as an executive search professional and ultimately HR director for a number of companies.

In 2016, Louise Royer joined Qualitas as Mr. Wadl’s partner. Her background is in advertising and media, where she worked in client service for various local and international agencies. She has collaborated with clients in a wide range of industry sectors including automotive, fast-moving consumer goods, tourism and construction.

“We have always worked across borders and by joining Kennedy we aim to further accelerate this international footprint, ultimately benefiting our current and future clients,” said Mr. Wadl. “Looking at the network’s partners, I am truly excited to work with a group of highly competent colleagues, coming together to share best practice knowledge and develop new ideas. Joining forces is sure to foster new opportunities and ensure continued relevance in an increasingly competitive market.”

Jorg Stegemann, CEO of Kennedy, said he welcomes Qualitas to the network. “Last year, we turned down approximately 100 search firms wanting to join our network as their level of experience, positioning, reputation in the market and professionalism did not meet our criteria,” he said. “Qualitas ticks all those boxes. With Ikelosz/ Kennedy Hungary and Delta Advisory/ Kennedy Czech Republic, Qualitas as Kennedy Austria establishes us as a solid and reliable partner for Central and Eastern Europe.”

“The Qualitas team speaks more than 10 languages, which enables us to manage searches in local languages all over Central and Eastern Europe,” he said. “According to the Swiss Economic Institute KOF, Austria is the fourth most globalized country in the world. More and more companies have set up shop in the Alpine Republic and as such have boosted Austria as a favorable business location thus bringing investments, innovations and jobs. We were looking for the right partner to complete our presence in this region and have found just that in Roland Wadl and his team.”

Austria is the 12th richest country in the world in terms of GDP per capita and has a well-developed social market economy. Since the fall of communism, Austrian companies have been active players and consolidators in Eastern Europe. Labor movements are particularly strong in Austria and have large influence on labor politics. Next to a highly developed industry, international tourism is the most important part of the national economy.

Kennedy Executive Search offers what it calls “360 talent management,” from executive search to coaching during a placement’s integration period, and a host of talent and leadership consulting services. The firm services clients across Europe and North America, with offices in Amsterdam, Copenhagen, Denver, Frankfurt, London, Milan, Paris and Prague.

Earlier this year, Kennedy partnered with Ikelosz in Budapest to strengthen its presence in Central Eastern Europe. George Kobelrausch, Ikelosz’s founder, has been working in the search sector since 2005 after a career spanning blue-chip companies, including Unilever. He has a track record of over 10 years in executive search and has recruited senior leadership functions in Hungary and other countries in CEE. He is an experienced business coach and certified consultant of the Innermetrix personality assessment system. His team includes Klara Gorog, a senior consultant with 20-plus years’ experience in the pharmaceutical industry, who heads up its life sciences practice.

Check Out These Related Articles Search Firms In Austria: