Stay Connected:
For some, these are challenging times to land a new position, but not for everyone. A new study shows a changing America when it comes to work. Some job seekers are optimistic, others not so much. 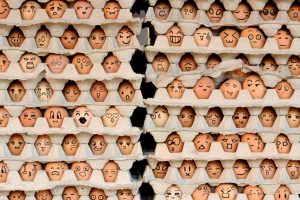 June 1, 2017 – Finding a new job can be tough, and it’s been even tougher this year, according to almost half (46 percent) of the employees surveyed for the “2017 Job Seeker Nation Study,” recently released by recruiting software firm Jobvite.

But that’s hardly the entire story. In many ways, how well people fare in their job search depends on what field they are in, and how much they earn, among other considerations. If an individual is in mining, for instance, the study confirmed that it’s no fun out there. Fifty-seven percent of those surveyed who worked in the mining industry said it’s been harder this year to find a job. Folks in real estate (30 percent), construction (25 percent) and services (23 percent) were largely in the same predicament. African-Americans and workers bringing home less than $25,000, at 30 percent and 34 percent respectively, were also having their difficulties.

On the other hand, certain others (15 percent) actually found it easier to land a job this year. Among the factors that boosted one’s odds of doing better in a job hunt were: living in a big city (19 percent) or working in telecommunications (28 percent), finance (21 percent) or technology (18 percent). And in the “nice work if you can get it” category, job seekers earning upwards of $300,000 (27 percent) report that this year has been perfectly fine for moving onward and upward.

Make no mistake. This is not your father’s employment landscape. The rules for looking for a new position have changed, job seekers said. Cover letters, for starters, are becoming passé. To win their current job or in applying for a new one, 47 percent of those surveyed submitted no cover letter. Only about a quarter (26 percent) of recruiters, surveyed for the report, thought cover letters made a difference in hiring a candidate. Both younger and older workers were in agreement on the subject: Fifty-eight percent of both those between 18 and 22 years old and those north of age 55 forwent submitting a cover letter.

And while many (64 percent) said they are satisfied with their job, the vast majority (81 percent) would be open to making a change should the right opportunity present itself.

Close to half (48 percent) of the job seekers surveyed said they would be willing to take at least a 10 percent pay cut to work at a job they are more interested in and passionate about, the report said. Among younger workers, 50 percent would take a pay cut. Fifteen percent of tech workers would do the same.

What Candidates Want. Shifting Priorities for Job Seekers
Organizations need talented employees to drive strategy and achieve goals, but with an improving economy finding and recruiting the right people is becoming more difficult. It’s clear that the changing global economy has created a demand for new jobs.

Many of those looking for jobs (25 percent) tend to moonlight as well. And though it should seem obvious, 54 percent said they do it because they need to extra money, an answer that 61 percent of women gave as well. Still, 26 percent hold secondary jobs because they feed their passion, the report said.

Not everyone, meanwhile, immediately says yes when a position is offered. Before accepting their current or most recent salary, 29 percent of those surveyed negotiated for a better deal. But 47 percent said they were uncomfortable with such an approach. Maybe they should reconsider, because 84 percent of those who did dicker ended up with better pay. A fifth of them, in fact, said their salary was 11 to 20 percent higher than it otherwise would have been. Men tend to be more comfortable than women with negotiating, according to the survey, by 56 percent to 38 percent.

Looking to the future, Jobvite said that the concept of a divided America was more myth than reality. “Sure, from 30,000 feet you see blue vs. red, coast versus coast,” said the report. “But dig a couple layers deeper and you don’t find a neatly divided population. That’s a misleading oversimplification. What we found is many different versions of the American job seeker.” 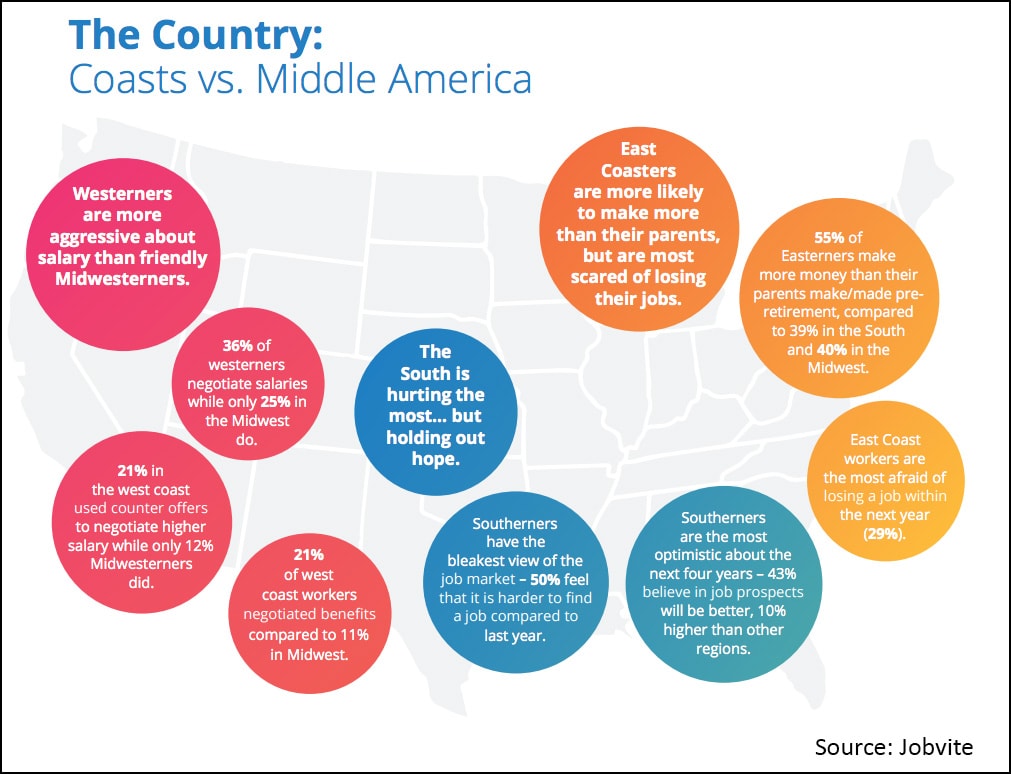 Given the new presidential administration, 37 percent of those looking for jobs believe their chances of landing a better job will be worse in the years ahead. Thirty-five percent feel the exact opposite.

Yet it’s more complicated and nuanced than that, Jobvite said. Men, for instance, tend to see a brighter future. Forty-one percent of the males surveyed said their chances for finding a new job are going to improve. Only 29 percent of the women saw it that way. A similar divide was found between generations: Forty-five percent of those 55 and older were optimistic about their chances, while only 19 percent of the 18-to-22-year old respondents felt the same.

There is no denying mixed emotions with the job market but many still do have a positive outlook. “Whether it continues will depend on whether the Trump administration and Republican lawmakers can convert rhetoric to legislation,” said Andy Knox, managing director of Chelsea Partners, a Los Angeles-based search firm.

“U.S. employers have a positive outlook as the country waits to understand how the new administration’s policies will come into effect,” said Michael Stull, senior vice president, Manpower North America. “Cautious optimism is the term I’d use,” he said. “Substantial reductions in corporate tax rates; reduced regulation of all sorts; the return of manufacturing and other corporate activities back to the United States; and a massive infrastructure investment package. Hope for all of these is what is what is driving much of the current economic optimism.”