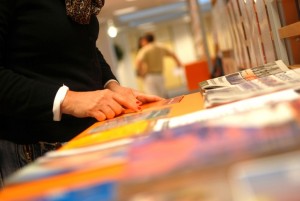 March 31, 2016 – Candidate motivations for changing jobs vary by geography and generation, according to a global study from ManpowerGroup Solutions, part of ManpowerGroup. The new white paper, “Below the Surface: Emerging Global Motivators and Job Search Preferences” reveals that “type of work” is now equal to “compensation” as a motivator for career decisions among candidates globally.

So, while money still talks, today’s candidates are equally interested in how work integrates with their daily lives.

Fifty six percent of global candidates identified “type of work” as one of the top three factors in making career decisions — overtaking “compensation” at 54 percent. That means nearly six out of 10 candidates believe that what they do is as important as how much they get paid.

“A person’s job role is an important differentiator in developed markets – as high as 76 percent in the U.K. – but in markets like Mexico and China, it’s as low as 31 percent,” said Jim McCoy, ManpowerGroup Solutions vice president and RPO practice lead. “So what’s important for candidates in countries like Mexico and China? It still comes down to compensation – 73 and 81 percent, respectively, compared to just 27 percent in the U.K.”

While compensation will always be near the top of people’s lists as a key motivator, a number of market watchers are starting to see other elements within a job gaining importance for workers. 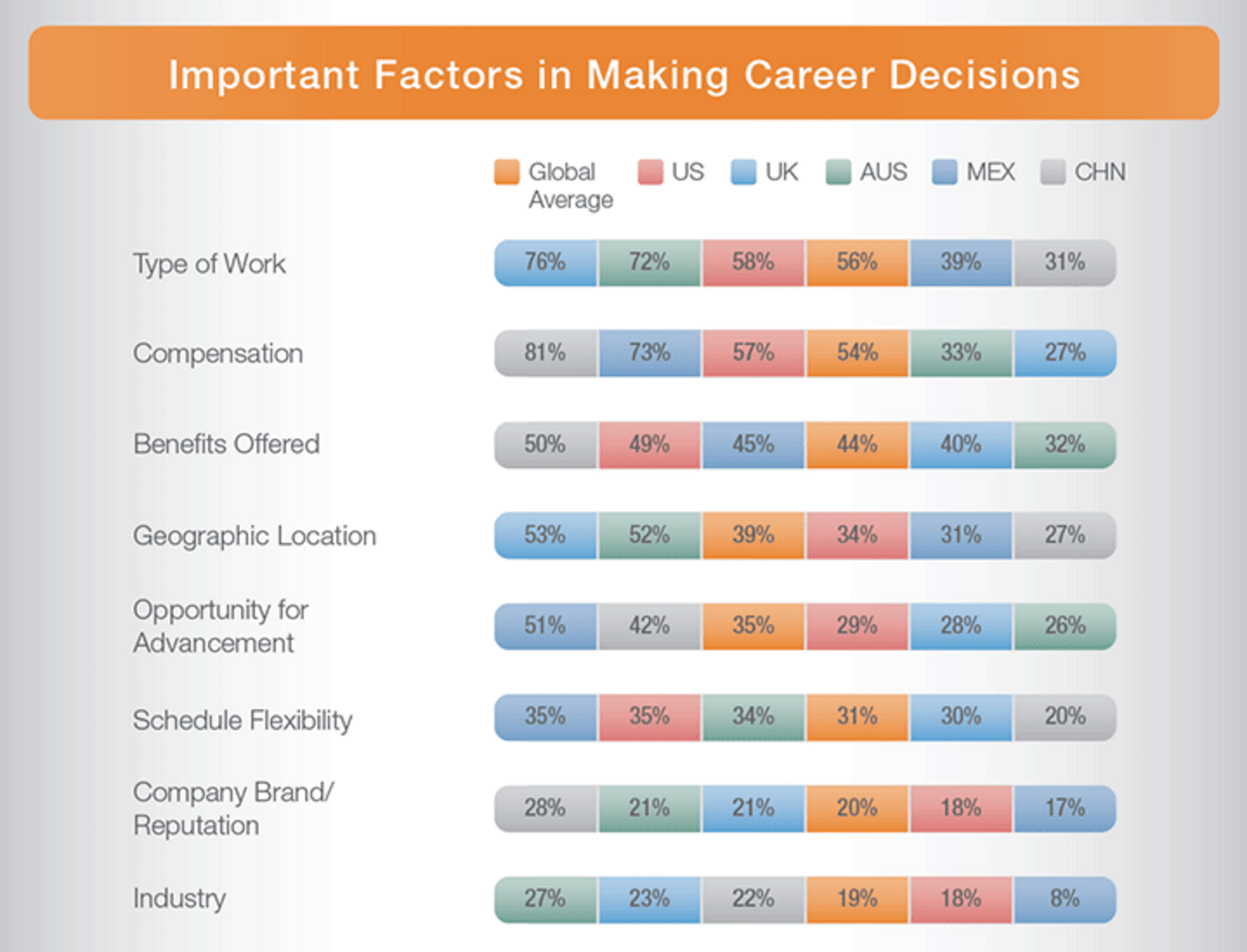 A recent survey by Egon Zehnder asking senior executives about what motivates them in the workplace found that 55 percent say “making a difference,” followed by “personal growth and development,” “leading and organizing others” and then “monetary compensation.”

This is no different with Millennials. While compensation and benefits are important to this generation, these aren’t the key drivers or motivators of that entire generation, according to a Pew Research Center analysis of U.S. Census Bureau data. What Millennials do value is this: a strong mentor and room for growth.

“Millennial leaders are driven by empathy and a need for purpose and collaboration,” said Jason Hanold, CEO and managing partner of Chicago-based search firm Hanold Associates. “They have a preference for the ‘startup culture’ and attraction toward small, high-growth companies over established brands.”

Millennials’s perceptions of how to advance their careers are distinctive from their older Gen X counterparts. As a group, they are generally-speaking driven by job mobility rather than loyalty. Nearly two out of three candidates who believe “the best way to advance their careers is to change jobs frequently” are Millennials (59 percent). Also, 60 percent of Millennials, globally, identified themselves as continuous candidates — “always looking for the next job opportunity.”

“Gen Yers (or Millennials) are always looking for the next best thing, and they want it right now,” said Yvette Moncrieffe, director of client delivery at ManpowerGroup Solutions North America. “They ask questions like, ‘How do I succeed?’ and, ‘Where am I going to be in three years?’ Companies are just starting to get wise to that now. Managers often do not make the investment in communicating a clear pathway for advancement.”

What motivates people is not the only thing that has changed in the workplace. How job seekers find employment has also progressed due to advancements in technology around the globe.

ManpowerGroup’s study found that applying to jobs online via laptop / desktop computer is the No. 1 method (34 percent) global candidates use in their job searches. And although the majority of those surveyed (77 percent) had previously worked with a recruiter on a job search, nearly one in four candidates prefer to search, identify and pursue job opportunities on their own from start to finish — five times as many who prefer to solely use a recruiter.

Popular job search sites such as LinkedIn in the U.S., Reed / Jobsite / Indeed in the U.K., Seek in Australia, OCC in Mexico and Zhaopin in China were visited by between 23 percent and 45 percent of survey respondents in the two weeks prior to completing the survey.

In China, Australia and Mexico, the top job search sites are visited nearly 50 percent more often by candidates than their U.S. and U.K. counterparts.

In some markets, such as Australia, the space is more clearly dominated by one site, Seek. It was visited by 41 percent of candidates. Because it is such a strong market leader and can quickly generate a large quantity of respondents, many Australian employers limit their outreach to this platform, overlooking more traditional and targeted outreach strategies that can yield higher quality candidates.

Chinese candidates are the most active users of job search sites. The landscape in China is far more competitive and research data indicates that users there regularly visit a number of sites. In Mexico, four sites dominate (OCC, Computabajob, Empleo.gob.mx and Zona Jobs).

Not surprisingly, other recent reports have looked closely at internet use and job searching. Of the nearly 20 percent of workers that change jobs each year 55 percent now use the Internet to seek employment and 33 percent rate internet job sites as the most effective channel for finding a job, according to a report by The Boston Consulting Group and Recruit Works Institute

Although employer-rating websites such as Glassdoor have generated concern among employers, usage of them by candidates appears to be significantly less than other sites. In the U.K., just three percent of the candidates surveyed had used the site and in the U.S., only 11 percent. In contrast, 27 percent of U.S. candidates had used LinkedIn during the same time period.

Candidates use a variety of sources to access company information. Company websites and search engine results prove to be the most widely used. Nearly one in three candidates globally (30 percent) use social media networks to obtain information about companies. Social media sites ranked third behind company websites (53 percent) and search engine results (52 percent).

“As the talent shortage grows, making it more difficult to find candidates with the right skills, businesses should understand exactly what job seekers look for,” said Kate Donovan, senior vice president of ManpowerGroup Solutions and global RPO president. “People with in-demand skills are making different career choices today based on lifestyle preferences and beliefs, which complicates traditional recruitment models and forces companies to think differently about their recruitment and workforce management strategies.” She said companies now need to tailor their strategies to better attract and retain top talent.

Check Out These Related Articles On Senior Level Hiring Trends:

Motivating Leaders: Why Unlocking Their Potential Is Critical Social Media Now No. 1 Global Platform for Finding Talent Struggling to Hire Millennials? Here's How to Get Them Onboard