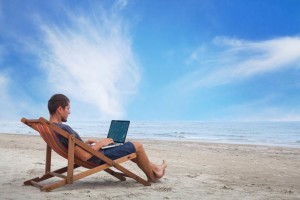 December 22, 2015 – With nearly 20 percent of workers changing jobs each year many of them are using the Internet to do so. No surprise there.

But according to a new report jointly produced by The Boston Consulting Group and Recruit Works Institute, titled ‘Job Seeker Trends 2015: Channels, Search Time, and Income Change,’ a majority of job seekers (55 percent) now use the Internet to seek employment and 33 percent rate Internet job sites as the most effective channel for finding a job.

About 55 percent of survey respondents sought new employment through the Internet search channel, compared with 36 percent who consulted paper media, 33 percent who relied on referrals, 24 percent who inquired directly with a prospective employer, 20 percent who used public services, and 17 percent who worked through permanent employment agencies.

About 40 percent of global job seekers used only one channel in their search, and about 25 percent used two.

One reason cited in the report as to why people look for new employment is to earn a higher income. But how often do employees achieve that?

About 57 percent of job changers overall saw their incomes improve, although job changers who had lost their jobs when they began their search fared worse overall. Not surprisingly, income improvements were strongest—and search times shorter—in countries with annual GDP growth of two percent or more.

Paradoxically, the advance of recruiting technologies has both lengthened and shortened the job search period. On one hand, Internet job advertisements allow employers to reach a wide target audience at the click of a mouse. On the other, job seekers today are able to subscribe to job posting updates and may thus spend a longer time casually browsing. On average, the global job changer took eight weeks to complete his or her research and waited five weeks to receive an offer.

“One of the key capabilities that differentiates the Internet channel from referrals from family or friends is the Internet’s ability to process a much higher volume of applications,” said Kazumasa Sakurai, a BCG partner and a coauthor of the report.

“We believe that key difference will drive the continued growth and evolution of Internet job search, and we look forward to seeing how future technological developments can continue to drive down the time job seekers spend searching for a new job without limiting—and in fact expanding—their employment options,” he said.

The report reviewed findings of a survey of more than 13,000 job seekers from 13 countries. The countries targeted by the survey cover 59 percent of the roughly three billion people employed globally, or 1.7 billion people.

Other reports also find that a similar shift is underway. According to the 2015 Work Trends report just released by Adecco Group, the role of social networks and mobile platforms in the job seeking and recruiting process is becoming more relevant. Among social networks, LinkedIn remains the most popular platform for professional purposes, for both recruiters (61 percent) and job seekers (34 percent), whereas Facebook is the go-to network for all social activities including personal branding says the report.

Numerous other reports have surfaced showing the increasing role social media is having on recruiting. The Society for Human Resource Management survey, “The Importance of Social Media for Recruiters and Job Seekers,” found that nearly two-thirds of companies (65 percent) found new hires through social media in the past year.

That near-religious use of technology is keeping American recruiters and their in-house counterparts way out front in the hunt for global talent. By contrast, only 40 percent of U.K. corporate recruiters say they are using social media effectively in candidate sourcing.

Other reports also share the sentiment of referrals being an effective hiring method. More than 50 percent of referred employees have been in their current position for more than five years, supporting various findings that have cited employee referrals as a top source of hiring, according to “The Impact of Successful Employee Referral Programs,” issued by iCIMS, Inc.

The study found that employee referrals are the most significant source-of-hire for employers, bringing in top talent that increases quality-of-hire, instances of cultural fit, positive results, and decreases key metrics such as cost-per-hire, time-to-fill, and turnover. Most employers hire nearly 40 percent of their staff from employee referrals.