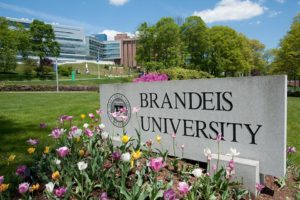 Dr. Fierke will succeed Lisa M. Lynch, a world-renowned economist who joined Brandeis as dean of the Heller School for Social Policy and Management in 2008. She became provost in 2014 and served as interim president of the university from 2015 until 2016. After a sabbatical, she will return to Brandeis as a professor of social and economic policy. Dr. Fierke was selected after a nine-month-long national search. The search committee included faculty and administrative leaders from all key departments at Brandeis.

As provost, Dr. Fierke will serve as the university’s chief academic officer, responsible for teaching, learning, scholarship, and research across the university. She will have broad oversight of the many dimensions of academic life, and will lead institutional priority setting related to Brandeis’ “Framework for the Future.”

In related news, R. William Funk & Associates, which specializes in recruitment for roles in higher education, has been enlisted to find a new president for Texas A&M.

“Dr. Fierke will bring to Brandeis a history of success in managing the operations of complex research institutions,” said Brandeis president Ron Liebowitz. “Her academic career in both research and mentorship has embodied the type of connectivity and excellence that makes Brandeis distinctive. And as a consensus builder with a demonstrated commitment to making institutions more diverse, equitable and inclusive, Dr. Fierke is already a champion of the values that have defined the Brandeis community since 1948.”

At Texas A&M, Dr. Fierke oversees the academic deans of 17 colleges and schools, two special-purpose branch campuses, university libraries and academic affairs. She also holds professorships in chemistry and biochemistry and maintains an active research portfolio, including current research into the SARS-CoV-2 virus.

Prior to arriving at Texas A&M in 2017, Fierke spent much of her career at the University of Michigan, where she began as a biological chemistry and chemistry professor, and served in several leadership roles, including chair of the chemistry department and vice provost and dean of the Rackham Graduate School. She did her postdoctoral fellowship at Pennsylvania State University and began her faculty career at Duke University. She earned her undergraduate degree in chemistry from Carleton College and her doctoral degree in biochemistry from Brandeis.

“As a doctoral student at Brandeis, I received a strong foundation in the spirit of inquiry and learned the value of cross-disciplinary research and teaching,” Dr. Fierke said. “I also became grounded in Brandeis’ founding values of academic excellence, openness and commitment to repairing the world. The opportunity to return to the university where I got my start as a scholar, working in the laboratory of William P. Jencks, is incredibly exciting.”

Brandeis University, founded in 1848, is a nonsectarian private research institution with a liberal arts focus. Located in Waltham, MA, Brandeis is situated on 235 acres comprising more than 100 academic and residential buildings. Its undergraduate enrollment last year was 3,688 students, and its graduate students numbered 2,137. There were 549 faculty members. Brandeis students may choose from a variety of majors in four broad areas: the creative arts, the humanities, the sciences and the social sciences. Many of these programs are interdisciplinary, and draw faculty from several different departments.

Ms. Rockman joined Isaacson, Miller in 2012 and has served a variety of clients in the education sector, both K-12 organizations and colleges and universities, as well as several philanthropic organizations. She has conducted numerous higher education presidential searches, including placements at New York University, Central European University, The Juilliard School and EARTH University. Her deep experience across the firm’s K-12 work includes searches for heads of independent schools, foundation program directors and officers, and executive directors of state education departments and a charter association. Before joining Isaacson, Miller, she was a member of the office of external relations at the MIT Sloan School of Management. Earlier in her career, she worked for an educational recruiting company that specializes in placing K-12 teachers and administrators at independent schools across the country.

Dr. Lange, provost emeritus of Duke University, joined Isaacson, Miller in 2015 to lead the firm’s higher education strategy practice. He advises clients on the strategic and operational issues that arise during leadership searches and in the transition period that follows the assumption of their new roles. He also provides support to established leaders on the strategic planning process and executing the resulting initiatives. His counsel and services are offered as a complement to the firm’s executive search services. Dr. Lange continues his tenure as a member of the faculty of Duke.