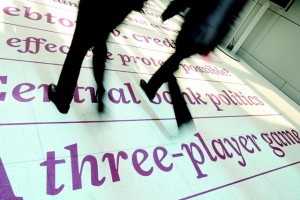 Mr. McGahey was previously professor, economics and public policy chair, environmental policy and sustainability management, at Milano School of International Affairs, Management, and Urban Policy. Prior to that, he was director, impact assessment and program officer, economic development for the Ford Foundation.

“Rosenzweig & Company distinguished itself via the deft and meticulous manner in which it drove an executive search that may have otherwise proven challenging to our organization,” said Christopher Sealey, chief operating officer of Institute for New Economic Thinking. “Their research-driven approach, highly personable demeanor, and tireless devotion to finding the best possible candidate — not simply an acceptable candidate — leaves us feeling that we have gained not just a new employee, but also a trusted agency partner.”

INET, co-founded by George Soros, James Balsillie, and William Janeway, is a global, New York City-based research and education foundation designed to broaden and accelerate the development of a new field of economic thought that will lead to real-world solutions to the key challenges of the 21st century.

A search through Hunt Scanlon Media databases shows that Rosenzweig & Co. has placed a number of top-flight global business leaders, including the Asia head of PR and communications for Manulife/John Hancock Asia (based in Hong Kong); the Latin America and Mexico senior legal counsel for Guardian Industries (based in Sao Paulo); chief executives for Kelso & Company private equity investments, the Canadian Civil Liberties Association, and Caesarstone; the CFO of Dundee REIT International; as well as board directors at Kinross Gold, Concordia Healthcare, and CAA. The firm has also placed two board members for a multi-billion dollar, publicly traded life sciences company, a chief administrative officer for a large private equity firm as well as a CEO and COO for a leading forest products company.