Menu
View our Events
Stay Connected:
As millions of Americans sneak in late summer vacations, a new Korn Ferry report finds that work often interferes with time off and most would prefer a salary increase rather than more vacation time. Let’s take a closer look at the report. 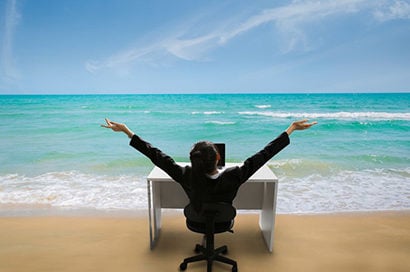 August 13, 2018 – Nearly two-thirds of professionals (63 percent) say they have cut short vacations because of occupational demands and pressure to perform at work, according to a new Korn Ferry survey. The study also found that nearly three quarters (73 percent) said they would prefer a higher salary over more vacation days.

According to the survey, staying in touch with work is more the norm than the exception. Nearly half (48 percent) of those surveyed said they check in with the office multiple times a day, and only two percent say they never check in while on vacation. A full third of respondents say they work while on vacation because they enjoy it.

“Those who feel they must always be in touch with the office are missing a critical point,” said Mark Royal, senior principal in Korn Ferry’s Chicago office. “Professionals who can turn off the demands of work – even for short periods of time – will be more engaged and productive in the long run.”

“Clearing the deck for a week off is hard work,” said Mr. Royal. “But planning better for down-time and negotiating set plug-in times with family and friends when keeping in contact with the office is a must. It can help professionals focus on the scenery instead of the screen.”

Half of the respondents to the July survey said that being too connected to work has created disagreements with their spouse.

American workers are stressed out and burned out but they refuse to take time out, according to a CareerBuilder survey. Three of five workers (61 percent) polled in the employment website’s study claimed they are burned out in their job. A third (33 percent) said their work has them under high or extremely high levels of stress.

But it gets worse. One third (33 percent) of workers polled said they have no plans to take a vacation. When they do take time off, they said their job was often on their mind. Three of every 10 workers (31 percent) said they check their work email while on vacation. Eighteen percent check in regularly with those at work. For many, work simply piles up when they are away. Over a third of those who responded to the survey (36 percent) said they had so much to do when they returned from being away that they would prefer to have stayed. Another 18 percent said their stress got worse because of their vacation.

Related: Workforce Summer Fling Could Set Up Race for Workers This Fall

“Leaders must set an example for their employees, said Rosemary Haefner, chief human resources officer (CHRO) at CareerBuilder. “If you’re a boss, it’s important that you role model how to take a vacation,” she said. “If you’re prone to answering every email and phone call that comes through on your vacation time, consider the example you’re setting for your team members. You need to set up an automated response email, and only respond to absolutely urgent emails while you’re away. Direct all calls to an assistant or colleague at the office. Show your employees that vacation time matters to you and your company and its culture.”

When speaking with recruiters and talent acquisition leaders today, one constant theme is the importance of employee engagement. Proper engagement, they all seem to agree on, should encompass the entire life cycle of an employee’s experience with a company, starting with those who are soon to join and continuing far beyond after they have left the organization ….. Here’s some further reading from Hunt Scanlon Media.

Employee Engagement Must Run Deep to Thrive
“We expect great service while dining at a restaurant,” said Vineet Gambhir, head of talent for Yahoo! in Asia Pacific. “The four walls of an organization are no different. Delivering an employee experience is exactly what world-class employee engagement is all about.”

According to a study in the “Employee Engagement Series” by Kronos Incorporated and Future Workplace, the biggest threat to building an engaged workforce is employee burnout. The report found that 95 percent of HR leaders admit employee burnout is sabotaging workforce retention. It’s now being seen as a widespread problem with no obvious solution in sight.

“Employee burnout has reached epidemic proportions,” said Charlie DeWitt, vice president of business development at Kronos. “While many organizations take steps to manage employee fatigue, there are far fewer efforts to proactively manage burnout. Not only can employee burnout sap productivity and fuel absenteeism, but as this survey shows, it will undermine engagement and cause an organization’s top performers to leave the business altogether.”

This creates a never-ending cycle of disruption that makes it difficult to build the high-performing workforce needed to compete in today’s business environment, he said. “Organizations should seek out and implement technology solutions that provide a proactive approach to mitigating burnout, such as the scheduling of rest during rolling periods as long as a year.”

Workforce analytics can also identify and alert managers to trends in scheduling and absenteeism that may indicate an employee is on the path to burnout so changes can be made.

According to the Kronos survey, nearly half of HR leaders (46 percent) say employee burnout is responsible for up to half (20 to 50 percent, specifically) of their annual workforce turnover. Almost 10 percent blame employee burnout for causing more than 50 percent of workforce turnover each year. Too much work and too little pay are problematic, but many issues fueling burnout are in HR’s control, according to the report. Unfair compensation (41 percent), unreasonable workload (32 percent), and too much overtime / after-hours work (32 percent) are the top three contributors to burnout, per the study.

“Engagement has been the workforce buzzword for the past decade,” said Mollie Lombardi, co-founder and CEO of Aptitude Research Partners. “We talk about ensuring that employees are challenged, appreciated, and in sync with strategic objectives, but even when they have an intellectual or emotional engagement with their work they sometimes still feel overwhelmed. While not all burnout can be eliminated, much of it can be avoided using critical strategies that balance consistency and personalization of schedules and workload; leverage managers as models for how their team can achieve work/life balance; and implement tools and technology that proactively manage burnout or otherwise support these efforts.”