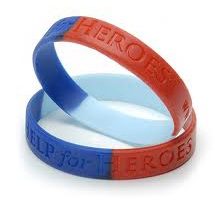 May 12, 2016 – Russell Reynolds Associates has been selected by Help for Heroes to lead its search for a chief executive officer. Founder Bryn Parry has decided that the time has come to find a successor.

Founded by Bryn and Emma Parry in 2007, Help for Heroes has grown to become one of the best known charities in the U.K. What was initially a fundraising and grant-giving charity now delivers its own recovery programs direct to beneficiaries, with the capacity and capability to support British armed forces’ service personnel and veterans who have had life-changing injuries, both physical and mental, as a result of conflicts, training exercises and the rigors of normal service.

Help for Heroes is seeking an energetic, forward-thinking and progressive CEO to pilot the organization through further growth and development. The incumbent CEO will provide operational leadership to a complex, national organization, working with its board to set and implement a strategy, and acting as an important external face for Help for Heroes across a range of stakeholders, including the British armed forces, the private sector, and government.

This is a role for an experienced leader, according to the organization, who has the requisite blend of charisma and organizational skills and, above all, “a strong empathy with the cause” for which Help for Heroes stands. This is likely to mean some prior interaction with, or direct experience of, the British armed forces. The ideal candidate will likely come from serving in a substantial leadership role, probably in the private sector, and will have to point to a track record of achievement in driving change, drawing on commercial skills and working successfully with, and through, others.

Russell Reynolds hopes to have the new CEO in place by July.

Candidates for this role must be able to demonstrate a combination of relevant, proven leadership skills, with empathy for the cause and an understanding of the values and the heritage of H4H. Specifically, this is likely to mean, at the very least, familiarity with the armed forces, possibly through serving, augmented by appropriate breadth of leadership experience and commercial cultures.

Key Skills and Experiences Required Include:

Russell Reynolds Associates has been active serving U.K.-based non-profits in recent months. The firm has just been retained by Save the Children International (SCI) to lead its search for a chief people officer. Concurrent with this assignment, Russell Reynolds is also leading the search for Save the Children UK’s chief executive officer. Justin Forsyth, chief executive since 2010, announced that he is leaving the charity.

In addition, the firm is currently leading searches for other U.K. charities, including Care Quality Commission, the Royal Brompton & Harefield NHS Foundation Trust (RBH), and the U.K. Export Finance (UKEF).