Menu
Stay Connected:
At a time when fears of a global recession are growing, a new report finds that a vast majority of businesses say that don’t see a downturn coming in the near future. Let’s take a look at the report as leading talent management experts from Direct Recruiters, Bullhorn, Gerard Daniels, and Boyden share their views. 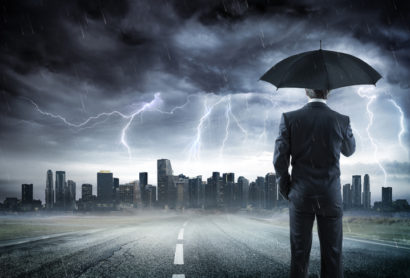 October 11, 2019 – A new Express Employment Professionals poll found an overwhelming majority of business leaders surveyed don’t expect a recession within the next six months, despite increased media focus on the possibility of an upcoming economic downturn. The survey found that just four percent of businesses expect a recession in the next three months, while only 14 percent expect one in three to six months.

“The people we talk to don’t see a recession any time soon,” said Bill Stoller, CEO of Express. “There are some signs of an overall slowing of the economy-but a slowdown and a recession are two different things. Right now, the job market is strong. So, the most important thing is not to let our fears launch a recession.”

“While we do not see a recession in the near term, in many ways we are still recovering from the last one — which left a deep scar on many investors,” said Tracie McMillion, head of global asset allocation strategy for the Wells Fargo Investment Institute.

Up north, it is much the same sentiment. “We are not seeing signs of recession in our area,” said Ted Maksimowski, an Express franchise owner of three offices in Ontario, Canada (Hamilton, Burlington and Brantford). “Consumer demand and spending is high, there is a lot of capital in the market, corporate profits continue to be positive and many of the major markets are at or near full employment.” 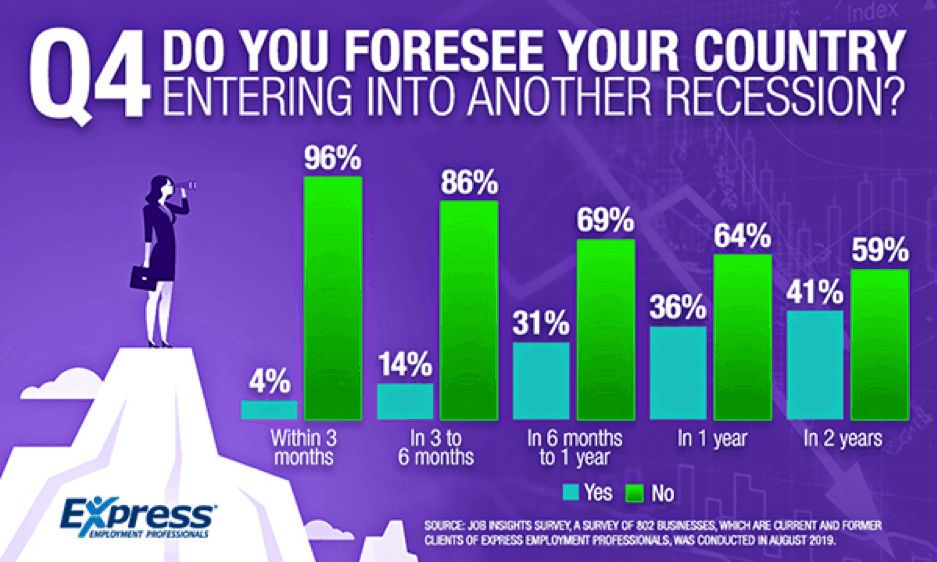 Hanif Hemani, an Express franchise owner, agrees that a recession is not likely in the near future. But both warn that there is economic uncertainty in the longer term, however

“Canada really is at the mercy of two large global ‘influencers’ in my opinion,” Mr. Hemani said. “What happens in the U.S. and China will affect economic activity here. Trade wars and tariffs certainly depress economic activity. In Saskatchewan, this can affect everything from oil prices to agriculture. Exports in particular are affected and in other parts of the country, the manufacturing sector is impacted.”

Mr. Maksimowski also agrees that several factors outside businesses’ control can negatively impact investments including uncertainty about U.S. trade and tariffs and the hesitancy to make major investments because of upcoming elections in North America.

The U.S. economy might keep on expanding for now, but growth will decelerate next year, according to the recently released National Association for Business Economics’ Outlook report. Odds of a recession go up at the end of next year with protectionism a top concern. Of those surveyed, 56 percent cite “trade policy (increased protectionism)” as the greatest downside risk to the U.S. economy through 2019.

Unemployment Rate Dips to 3.5 Percent
The economy is still creating jobs at a reasonable pace. In fact, companies seem to be hiring with abandon as we enter an unprecedented 11th year of expansion. Let’s take a look into the just released jobs report as leading search consultants..

“Increased trade protectionism is considered the primary downside risk to growth by a majority of respondents, followed by financial market strains and a global growth slowdown,” said survey chair Gregory Daco, chief U.S. economist, Oxford Economics. “Recession risks are perceived to be low in the near term, but to rise rapidly in 2020. Panelists put the odds of a recession starting in 2019 at 15 percent, climbing to 60 percent by the end of 2020.”

“I believe the strong labor market and consumer confidence will be enough to hold off the U.S. from falling into recession,” said Dan Charney, president of Direct Recruiters, Inc. However, he added, “I think there will be slowdown over the next two years because of all of the uncertainty around China and other global economic issues as well as headlines here at home. I am encouraging my clients in corporate leadership to proceed with caution while focusing on fundamentals as opposed to headlines which often spark fear and cause us to be reactive as opposed to proactive.”

“Our data says that labor is too tight; there are too few people to fill the demand and that’s creating a drag on corporate productivity and growth,” said Art Papas, founder and CEO of Bullhorn. Meanwhile, he continued, “baby boomers exiting the workforce are creating even more pressure. While that doesn’t predict a recession, it does create enormous headwinds to growth.”

“While executives are not predicting a recession in North America soon there are storm clouds for global growth and the possibility of deceleration in economic growth,” said Alison Gaines, CEO of Gerard Daniels. “Leaders should plan for this and think about how resilient are their strategy, balance sheet and executive and board talent to lead the organization during times of turbulence. Scenario planning and risk management skills will be worked hard at this time. Sophisticated organizations will make use of data analytics to gain a real time sense of changes in consumer and client behavior and adapt very quickly.”

“We should expect to see a slight downturn as it relates to earnings over the next 18-24 months, across the globe in all sectors,” said David Nosal, chairman and managing partner of NGS Global. However, he added, “at the same time we will see organizations consistently trying to attract the best talent to ensure they have the right calibre of leadership, skills and competencies within the organization to weather more turbulent economic times.”

A’t a very high level, I absolutely believe we will see a reduction in the global market with regard to executive search,” said Mr. Nosal. “My thoughts are that organizations will continue to tighten up on the manufacturing and operations side of the business, while seeking ways to stimulate growth. This means they will continue to assess the talent they have in the senior/leadership roles, and roles in marketing, digital, as well as at the CEO and CFO levels. My belief is that markets fluctuate every seven to ten years, but in the world of executive search, the need remains consistent across small, medium, large, public and private companies needing to find the best talent to power through any recession.”

“It does not appear that a recession is imminent in the near term, but we are noticing pockets of concern in some regions with North America,” said Robert Travis, managing partner at Boyden. “Most notably within the oil and gas sector in Alberta.” In Canada, he added, “there have been significant cuts in oil production, drilling investments are down, and with the upcoming Federal election, there is tremendous uncertainty around the future of the Trans Mountain Pipeline (TMX).

“Global trade tensions are creating heightened levels of insecurity that is impacting business investment,” he said. “Specifically, the negative impact of the U.S.-China trade war is being felt by our clients. The escalation in tariffs has impacted decision making around capital expenditures, and many clients have been forced to implement expensive changes to their supply chains.”

“I don’t see a recession coming in the next two to three years, notwithstanding what I see as an overzealous press saying otherwise,” said Gary Saenger, president of Santa Clarita, California-based Saenger Associates. “We’ve continued to see a strengthening of demand from our current retained executive search clients in our primary practice areas – anything to do with manufacturing, distribution and supply chain in industrial products, including aerospace and defense, and consumer products,” said Mr. Saenger.

“In direct reaction to the U.S.-China trade war, a couple of our clients are looking for alternatives to China manufacturing, Vietnam and Thailand specifically,” he said. “We are helping our clients through our alliance with IRC Global Executive Search Partners, which represents 90 cities in 45 countries. The challenges can also present opportunities.”