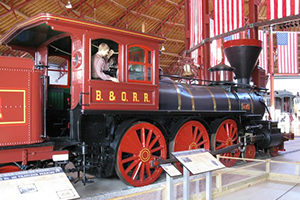 “Kris brings the ideal background we were seeking as we prepare for growth and a new era at the B&O Museum,” said Francis Smyth, chairman of the B&O Museum board of directors. “She has expertise in destination management, a background in transportation and community economic development, and most importantly, an entrepreneurial mindset to lead our efforts to transform west Baltimore and to guide us forward toward the 200th anniversary of American railroading.”

“We are so fortunate to find such a capable leader in Kris to assume the mantle from Courtney,” said Mr. Smyth. “With time for transition between the two, the museum is postured to launch next steps towards our long-term growth plans which begin with the construction of the Baltimore City Mounted Police Unit stables this summer.”

Ms. Hoellen, who will assume her new role in September, currently serves as a senior vice president at the National Aquarium. She also has a background in transportation having worked at the Transportation Research Board of the National Academy of Sciences as well as at the American Association of State Highway and Transportation Officials. Additionally, Ms. Hoellen was a senior executive at the Conservation Fund, devoting much of her career to working with communities throughout the U.S. on becoming economically and environmentally healthy.

“To have the opportunity to help transform the museum into a showcase of history and innovation, and positively contribute to the economic development of the surrounding community is exceedingly gratifying, and I couldn’t be more honored with the opportunity,” said Ms. Hoellen.

The B&O Railroad Museum is one of Greater Baltimore’s most popular tourist attractions. The museum, which has a $4.5 million budget, attracted 228,500 visitors last year. The 40-acre historic site is regarded as the birthplace of American railroading and includes the 1851 Mt. Clare Station, the 1884 Baldwin Roundhouse and the first mile of commercial railroad track in America.

Established in 1994, Durakis Executive Search is a retained search firm focused on fitting candidates for the C-Suite and their direct reports across a wide range of industries. Led by Chuck Durakis, who has more than 30 years of experience in executive search, the firm combines insight, rigor, research and a powerful network to match the right candidates to each opportunity. Before founding the firm, Mr. Durakis was vice president with CTPartners.

.K.-based executive recruiter Saxton Bampfylde placed Laura Pye as the director of National Museums Liverpool. Ms. Pye has been the head of culture for Bristol City Council since 2015 and has responsibility for five museums – Bristol Museum and Art Gallery, M Shed, Blaise Castle House, Red Lodge and the Georgian House.

spen Leadership Group, an executive recruitment firm based in Aspen, CO, recently placed Bill Friedeman as the new chief advancement officer of the National Museum of Wildlife Art. The National Museum of Wildlife Art serves a variety of guests, from local families to international visitors, by providing access to outstanding art, and engaging them in enlightening programming.

oetic Search recruited Crystal Bowyer as the president and CEO of The National Children’s Museum. Rhyan Zweifler, president of the Chicago recruitment firm, led the assignment. Founded as the Capital Children’s Museum in 1974, the museum served children and families for thirty years in Northeast Washington, D.C.

ussell Reynolds Associates has placed Daniel Menelly as president and CEO of The DoSeum, a San Antonio museum for children. He came to The DoSeum from the Rochester Museum & Science Center, where he served as president and chief science officer.