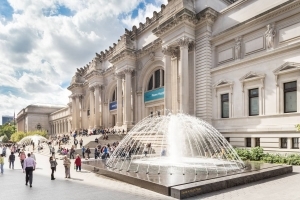 Mr. Hollein “is an innovative and inspiring museum leader and has a proven record of building collections and organizing outstanding exhibitions,” said Daniel Brodsky, chairman of the museum’s board of trustees. “His knowledge of and passion for art is expansive, and we have great confidence that he will develop a shared vision and a strong collaboration with our extraordinary curators, conservators, program leaders and supporters.”

An accomplished curator and museum leader, Mr. Hollein is said to have exceptional skill at building collections, diversifying audiences and broadening institutional development. He will assume his new role this summer.

Mr. Hollein currently leads the Fine Arts Museums of San Francisco. He began his career at the Guggenheim Museum as chief of staff and executive assistant to the director. After six years he moved to Frankfurt to lead the Schirn Kunsthalle, which focuses on modern and contemporary art. In 2006, he was appointed to lead the Städel Museum, which houses one of Germany’s most outstanding collections of old master, nineteenth-century and modern art, and the Liebieghaus, which has a world-renowned sculpture collection that ranges from ancient Egypt to Neoclassicism.

Mr. Hollein’s appointment follows a yearlong search led by Phillips Oppenheim and the museum’s search committee, which was co-chaired by Candace Beinecke and Richard Chilton. The search began with the development of a job description informed by the participation of more than 400 staff, trustees and supporters. The committee then received about 100 nominations, comprising a broad and diverse pool, and met more than 25 times before and during the interview process.

“There was tremendous enthusiasm for this leadership opportunity, especially the chance to work with the Met’s exceptionally talented curatorial, conservation and program staff,” said Ms. Beinecke. “We sought a broad pool of museum leaders, and we were gratified by the diversity and quality of the candidates we considered. We are thrilled that Max will be joining the Met.”

Mr. Chilton echoed the enthusiasm of his partner on the institution’s search committee. “The Met is the largest museum in the United States and one of the largest in the world,” he said. “Max’s passion for encyclopedic museums, for art, for scholarship and for engaging local and global audiences is a wonderful fit for the Met.”

The Metropolitan Museum of Art, among the world’s great cultural institutions, has an encyclopedic collection of more than two million objects spanning 5,000 years, an operating budget of $315 million, an endowment of $3.1 billion and a staff of 2,200 working at three sites: the Met Fifth Avenue, the Met Cloisters and the Met Breuer.

The firm recently recruited senior leaders for other non-profit organizations, including Matthew Teitelbaum as executive director of the Boston Museum of Fine Arts; Salvador Salort-Pons as director, president and CEO of the Detroit Institute of Arts; Linda McNeil Tantawi as CEO for the Greater New York City affiliate of Susan G. Komen for the Cure; and Judy Harris Kluger as executive director of Sanctuary for Families.