Menu
View our Events
Stay Connected:
A new survey on the gig economy from the Economist Intelligence Unit finds a sizable, semi-permanent workforce is becoming the norm. John Thacker, a partner with Beecher Reagan Advisors, weighs in on the gig economy’s impact on recruiters. 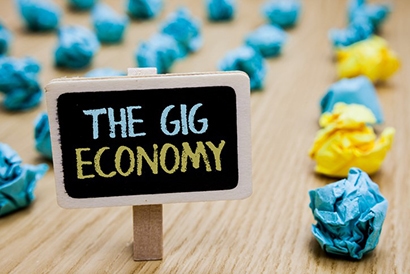 February 22, 2019 – Market disruption and talent shortages require new ways of thinking about your workforce. Because of their many advantages, semi-permanent gig talent pools are now the norm. But managing them can be a challenge.

Company decision makers indicate that they are increasing their reliance on gig workers, with more than 60 percent expecting the use of contract labor to grow over the next five years, according to a newly released report from the Economist Intelligence Unit (EIU), commissioned by North Highland. Organizations say that the top motivations for using temporary workers are cost savings, agility and project-specific needs.

The EIU polled executives at 210 companies with 2,000 or more employees in the U.S. and U.K. The study found that gig help makes up 20 percent or more of the workforce at nearly 60 percent of organizations surveyed.

“Market disruption requires new ways of thinking about your workforce, and gig talent pools offer greater flexibility and cost savings,” said Jeff McMahon, managing director at North Highland. “However, companies are challenged with how best to manage gig workers to fit with their processes, culture and management workload. As organizations navigate the art of onboarding and integrating temporary help, they are finding the benefits more than offset added risk and supervision.”

The report found that 63 percent of company respondents strongly or somewhat agreed that their organizations cannot meet strategic objectives without gig workers. Areas that use temporary help most frequently include logistics and delivery (50 percent), manufacturing operations/production roles (45 percent), customer experience/engagement (39 percent) and information technology (39 percent). The most common model for integrating gig workers is to assemble them into teams managed by a full-time employee.

The choice to use an on demand workforce flows from mounting business challenges. Respondents said that they are under pressure to increase workforce productivity (79 percent) and reduce labor expenses (67 percent). Moreover, workforce flexibility is increasingly important, with nearly three-quarters (73 percent) of those surveyed saying they are undergoing some type of transformation and two-thirds are being forced to adapt to a more volatile business environment.

A Look Into Who is Driving the Gig Economy
Today’s business environment is vastly different from just five years ago. Success is no longer measured by a company’s longevity or headcount. Today, the business currency is agility and innovation. Technology has forever transformed how work gets done, and the flexible workforce has changed who does it.

The advantages that an on-demand workforce brings, combined with progress in recruiting, onboarding and integrating temporary help, ensure that the gig workforce is here to stay. Only one percent of respondents reported having no formal workforce augmentation strategy.

The Economist Intelligence Unit said that to successfully incorporate gig workers, companies must factor in workers’ skills for particular roles, the company culture and a thoughtful onboarding strategy.

“All companies of all sizes use gig workers,” said Mr. McMahon. “That’s not new. What is changing is the fact that a sizable, semi-permanent gig workforce is becoming the norm. As companies master the art of onboarding and integrating gig workers, they are discovering that the greater flexibility and lower costs more than offset the increased risk and burden on management,” he said. “That’s a big reason why more than six in 10 respondents see their companies making greater use of the gig workforce over the next five years.”

Jonas Prising, chairman and chief executive officer of ManpowerGroup, said that the gap between the skills people have and those employers need is widening, polarizing workforces and populations around the world. “Companies have to find talent from new sources and do more to develop and keep their people engaged,” he said. “At the same time, what people want is changing. They are working longer, learning more and seeking a better balance between work and home.”

“The gig economy has created opportunities for individual consultants to pursue independent project work, providing them with a more flexible work schedule,” said John Thacker, partner at of Beecher Reagan Advisors. “In addition, digital platforms have emerged enabling a virtual marketplace for consultants to select project work without having to source or sell that work.”

“Many more consultants today, particularly in the middle of the pyramid (manager, senior manager equivalents), are electing to work independently,” he said. “A gap in the middle of the pyramid is not a new phenomenon, but this gap will widen as a result of the gig economy. This will make it very challenging for consulting partners to effectively plan for and efficiently staff their projects.”

Mr. Thacker said that 20 percent more search consultants elect to work independently today than they did just five years ago, creating a larger gap in the “middle of the pyramid” for consulting firms. “The short-term impact for consulting firms is the potential loss of project work and revenue to independent workers,” he said. “Some firms have already begun to address this by building communities of independent workers whom the firms can leverage for project work. However, we feel the long-term impact of the gig economy will be much more significant.”

“If more consultants continue to leave traditional consulting firms, the gap in the middle of the pyramid will manifest into a gap at the partner level, or the top of the pyramid,” said Mr. Thacker. “This will create free agency at the partner level and we expect to see more movement of partners from one consulting firm to another. It will be increasingly important for consulting firms to have trusted executive search partners, who are well networked and educated on the consulting market, to help them navigate this change.”

When asked if there is anything that can be done to help prepare senior leaders for managing temporary or gig talent, Mr. Thacker said that leaders must understand their employment brand and move from a time and material business to an outcome-based model. “This will alleviate the pressure to have the perfect pyramid,” he said. “Lastly, they should embrace free agency and look to adapt to a world where W-2 employees and contractor labor have more currency. It may seem daunting but if you do the above, you will win.”