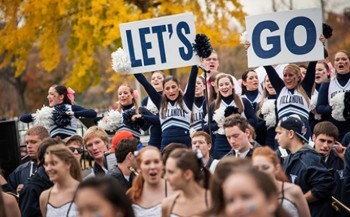 September 11, 2015 – Atlanta-based Parker Executive Search has recruited Mark Jackson as director of athletics at Villanova University. He succeeds Vince Nicastro, who held the position for 15 years.

A search committee, composed of board members, alumni, faculty and staff, oversaw the search process. In his new role, Mr. Jackson provides executive leadership, strategic direction and oversight for all of Villanova’s 24 sports and more than 500 student-athletes. With nearly 20 years in collegiate and professional sports, Mr. Jackson most recently served as the senior associate director of athletics and chief innovation officer at the University of Southern California (USC). Prior to that, he was with Syracuse University, where during his tenure he handled all aspects of athletic administration for 20 men’s and women’s programs.

“Our search centered on finding an individual who believes in the values and mission of Villanova University, understands the changing landscape of college athletics, and possesses the skills necessary to sustain and grow Villanova’s success–athletically, academically and administratively–now and in the future,” said the Rev. Peter M. Donohue, president of Villanova. “Mark quickly distinguished himself as an energetic, visionary leader who possesses the experience, leadership skills and character traits we were seeking, making it clear that he is the right choice for this role.”

Since 1842, Villanova University’s Augustinian Catholic intellectual tradition has been the cornerstone of an academic community in which students learn to think critically, act compassionately and succeed while serving others. There are more than 10,000 undergraduate, graduate and law students in the University’s six colleges.

Recently, Parker Executive Search placed the director of athletics and physical education at Vassar College as well as the athletic director at the University of Alabama at Birmingham.