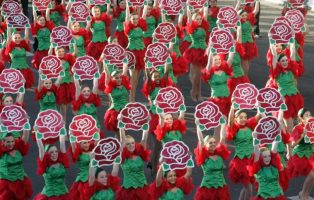 December 6, 2016 – With the 103rd Rose Bowl just weeks away, executive search firm Berkhemer Clayton has recruited David Eads as executive director and chief executive officer of the Pasadena Tournament of Roses Association (The Rose Parade and Rose Bowl Game). He will join the organization in February 2017. William Flinn, current association executive director, is retiring after more than three decades with the organization.

“The competition was intense,” said Ms. Berkhemer-Credaire. “We dedicated a team of five Berkhemer Clayton staff in order to accomplish the outreach and interviews from August to the end of October.” She said the goal was to have a finalist selected by Thanksgiving. “We always handle CEO searches within three to four months, but this timing was especially critical to enable the selected executive to ‘shadow’ the retiring CEO during the all-important month of December, building up to America’s new year’s celebration,” said Ms. Berkhemer-Credaire.

The executive director / CEO of the association will work closely with its president, the executive committee, and at-large directors. The incoming leader will manage a staff of 33 year round and, according to Ms. Berkhemer-Credaire, inspire and support a volunteer committee structure, populated by 935 active members.

The association sought a candidate with leadership and management expertise gained in a large non-profit organization, or similarly large corporate or sports organization, with significant numbers of active participants where leading by influence and motivation was needed. It also desired a leader with experience overseeing large, successful events, and managing volunteers on schedules to maintain efficiency and deadlines.

Background requirements included national televised event production, enthusiasm for and experience with college sports, media communications track record, large staff and budget management, and demonstrated leadership to manage a large non-profit organization. The Tournament of Roses includes 1,000 members who are involved in all aspects of the event year-round, and a very engaged board of directors.

Mr. Eads is executive vice president and chief operating officer for the Los Angeles Area Chamber of Commerce. He has held senior executive roles at the LA Chamber since 2000. Currently, he oversees finance & budget management, corporate relations, membership, communications, special events, and the Chamber Foundation. He manages 12 direct reports, 70 staff members, and an annual budget of $15 million for one of the largest chambers in the country. Previously, he was EVP of the Wichita Convention & Visitors Bureau for 10 years and developed the Greater Wichita Area Sports Commission.

“David has in-depth expertise in non-profit management and working with a very active board — which as the search evolved, non-profit management was primary to his selection,” Ms. Berkhemer-Credaire. “He also has previous experience as a senior executive with the Wichita Convention & Visitors Bureau, orchestrating the live television broadcast of the Miss USA and Miss Teen USA Pageants, and working with his college athletic department at Wichita State.”

“We are confident that David, due to his many talents and attributes, coupled with outstanding leadership qualities, will be a tremendous asset to the Tournament of Roses organization and will be a great fit with our volunteer-driven, staff-supported association,” said Lance Tibbet, executive vice president and chair of the executive search committee. “We are pleased to welcome David to the Tournament family.”

The Rose Parade kicks off the new year  for millions of fans all around the world. Now in its 128th year, the Rose Parade is watched in person by 600,000 spectators on the Pasadena, CA parade route, is broadcast on most major television networks in the U.S., and is seen worldwide in more than 100 countries and territories. The Rose Bowl Game is the oldest in the country, and for 103 years it has been referred to as “The Grandaddy of Bowl Games.”

A Prior Decade of Service

Prior to launching Berkhemer Clayton with co-founder Fred Clayton 23 years ago, Ms. Berkhemer-Credaire owned a public relations agency in Los Angeles. For 10 years, her firm had handled the Pasadena Tournament of Roses Association as a client serving its national public relations needs and this, she said, led to her deep knowledge of its culture, its executive committee members and the retiring Mr. Flinn. However, Berkhemer Clayton had not previous handled executive searches for the organization.

Check Out These Related Articles On Searches for Historic Non-Profits: