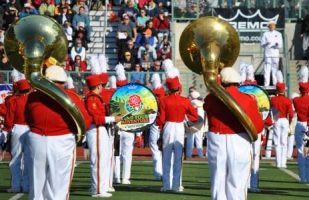 September 9, 2016 – Berkhemer Clayton has been retained by the Pasadena Tournament of Roses Association (The Rose Parade and Rose Bowl Game) to recruit its next executive director and chief executive officer. William Flinn, current association executive director, will retire next year after more than three decades with the organization.

Betsy Berkhemer-Credaire, the search firm’s president and corporate board practice leader, is heading the coveted assignment. Ms. Berkhemer-Credaire had an inside track to being awarded this search; she handled year-round public relations for the association when she owned a PR agency before launching her recruitment firm with business partner Fred Clayton in 1994.

The executive director / CEO of the association will work closely with its president, the executive committee, and at-large directors. The incumbent will manage a staff of 33 year round and, according to Ms. Berkhemer-Credaire, inspire and support the robust volunteer committee structure, populated by 935 active members.

The incoming CEO, she added, will need to have a public relations mind-set, along with reputation management, public awareness, and crisis management skills.

“The new executive director / CEO will guide strategic direction amid the digital and technological landscape in sports and entertainment today, while reinforcing the Rose Bowl Game legacy in college football with the PAC 12, Big 10 and National College Football Playoff system,” said Ms. Berkhemer-Credaire.

The association seeks a candidate with leadership and management expertise gained in a large non-profit organization, or similarly large corporate or sports organization, with significant numbers of active participants where leading by influence and motivation was needed. It also desires a leader with experience overseeing large, successful events, and managing volunteers on schedules to maintain efficiency and deadlines.

The Rose Parade kicks off the New Year for millions of fans all around the world. Now in its 128th year, the Rose Parade is watched in person by 600,000 spectators on the Pasadena, CA parade route, is broadcast on most major television networks in the U.S., and is seen worldwide in more than 100 countries and territories. The Rose Bowl Game is the oldest in the country, and for 103 years it has been referred to as “The Grandaddy of Bowl Games.”

Check Out These Related Articles On Searches for College Sports: