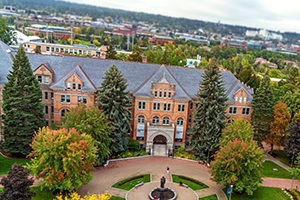 She will succeed Lizbeth Martin, who is serving as interim provost for the 2018-19 academic year and is facilitating Gonzaga’s transition to a provost structure.

Gonzaga president Thayne McCulloh said the hiring of Dr. González, former associate provost for faculty affairs and professor in the department of Chicana/o, Latina/o studies at Loyola Marymount University (LMU) in Los Angeles, comes with the full support of the search committee. The university reviewed more than 100 applications and narrowed the search to the finalists who interviewed on campus late last year.

This is a new role for Gonzaga, which is revamping its administrative structure. “In asking Dr. González to join the Gonzaga community, we are so excited to engage with a proven leader in higher education, an accomplished scholar and skillful administrator who will guide Gonzaga’s efforts to provide students with an exceptional academic experience in the Jesuit tradition,” said Mr. McCulloh. “Dr. González brings deep and distinct experience working with faculty and students alike, along with a powerful perspective in a multitude of areas ranging from interculturalism to interdisciplinary studies.”

Since 2001, Dr. González has served in a number of academic and administrative roles at LMU. From 2001 to 2009, she was chair of the department of Chicana/o studies, leading it through its first formal review and accreditation. Following an American Council on Education Fellowship, she was appointed director of faculty development and associate provost of faculty affairs.

Established in 1881 by the Society of Jesus, Gonzaga offers bachelor’s degrees, master’s degrees and doctoral degrees through its seven colleges – the College of Arts and Sciences, School of Business Administration, School of Education, School of Engineering & Applied Science, School of Law, School of Nursing and Human Physiology, and the School of Professional Studies.

For over three decades, Academic Search has been a leader in designing and implementing search processes for leaders of colleges and universities across the country. The firm has completed more than 380 executive searches for higher education institutions and related organizations, for roles ranging from presidents to provosts to deans.

Academic Search Adds Three Former HBCU Presidents
Academic Search recently expanded its ability to attract top leadership talent to historically black colleges and universities (HBCU) with the addition of the founders of TM2 Education Search to the firm. TM2 was established in 2016 to identify and place candidates in top administrative posts at HBCUs.

Dr. Lemons became president of Academic Search in 2017, after serving for 25 years as a college president in both public and private higher education. A recognized leader in the academy, he has been particularly devoted to supporting leadership talent by working with new college presidents on the faculty of the new presidents’ programs of the American Association of State Colleges and Universities and the Council of Independent Colleges and through the professional development programs for aspiring leaders of the American Academic Leadership Institute (AALI). Dr. Lemons was president of Susquehanna University in Selinsgrove, PA, from 2001 through June of last year, and prior to that served as chancellor of the University of Virginia’s (UVA) College at Wise, UVA’s public liberal arts college in southwestern Virginia

Dr. Hasselmo is president emerita of the AALI in Washington, D.C. and of Hendrix College. Prior to becoming the founding president of AALI, she was managing director of Academic Search Consultation Service. Her earlier career in higher education administration spanned positions from faculty leadership to the presidency. Dr. Hasselmo’s experience includes work at both public and private colleges and universities. She has also held a variety of chairs and presidencies of national higher education boards and associations.

Mr. Butler is responsible for assisting the lead consultants with research functions, preparing written documents for searches, recruiting and evaluation of applicants, and providing assistance to the lead consultants during committee meetings and neutral site interviews. He came to Academic Search from Apex CoVantage, a business solutions firm, in which he worked in the editorial division and supervised prepress work on academic monographs and textbooks.