September 14, 2014 – The last 25 years have brought significant advancement for women in the talent management profession. The unprecedented numbers of those coming into the field, taking on leadership roles, starting their own firms, and winning prestigious assignments has transformed the recruiting business. It is at such a point, in fact, that many female recruiters feel confident that the turf on which they compete with their male counterparts is, for the most part, level. Success or failure, these women say, largely rests with their own abilities and work ethic. Delivering for the client, they say, is the bottom line.

If this were true universally, that would be good news. But it isn’t. It is difficult, critics point out, to find women in the CEO position at the top ranked search firms, where the ultimate power lies, and the status quo there is not likely to improve anytime soon. Down in the trenches, meanwhile, where the real business of identifying, assessing and culling candidates takes place, some women recruiters maintain that they still have to contend with a testosterone-weighted cultural bias. It becomes evident periodically, they say, in situations like shootouts in which women feel they must prove themselves twice as worthy as the men who are after the same assignment. “There’s still this intangible that’s there when it comes to gender,” says Judith von Seldeneck, who as chairman and CEO of Diversified Search is the lone woman in command of a top 10 search firm. “It’s like a divide. And how do you cross over that divide and how do you deal with that divide? I think we’re getting better and better at it, but it’s still different for women.”

As every politician knows, different statistics can tell conflicting stories about the same subject. So it is that the difference between women in search taking big strides forward or making little real headway comes down to what one considers most important or chooses to focus on. But in the end, both perspectives are revealing of how far women have come in the recruiting field and the miles they still have to go.

It would be hard to argue, for starters, that the increasing number of women entering the executive search business is inconsequential. According to research compiled by Hunt Scanlon Media over the last quarter century, just 17 percent of the total consultant ranks of the ‘Big Five’ global search firms were female in 1991. That number has now more than doubled to 37 percent. What’s more, while these industry leading firms claimed 907 total consultants 23 years ago, today there are nearly 1,995. During that time, the number of female consultants rose from 156 to 732. So, while the top five search firms doubled in overall consultant workforce, their female consultant ranks increased five-fold during this period. 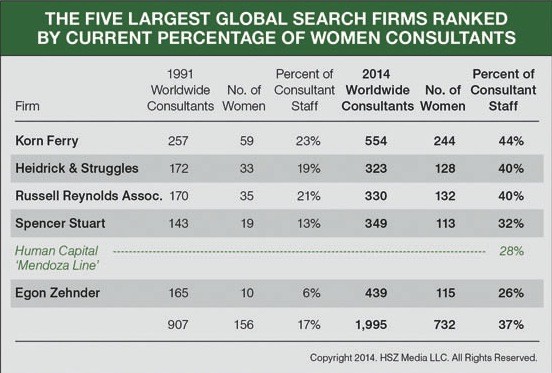 Leading the way forward has been Russell Reynolds Associates, the fifth largest search firm. Twenty one percent of its consultant workforce was female back in 1991, just 35 women among 170 worldwide; in 2014 a jolting 40 percent of the firm’s global consultant ranks are women. Importantly, 45 percent of Reynolds’ global practice leaders are female. From the firm’s financial officers’ practice to luxury and retail, the firm’s female practice leaders are responsible for a wide range of businesses. “We have a great history of successful women in the firm,” says Reynolds’ chief executive officer Clarke Murphy. “And in my mind, strength attracts strength: so many of our female consultants have been great mentors to other women joining the firm.

Korn Ferry, the world’s largest talent management provider, also boasts progressive statistics when it comes to women: 44 percent of the firm’s current global consultant workforce is female, the highest in the industry; that’s up from 23 percent in 1991 when it was the highest then. At Heidrick & Struggles, the search industry’s other publicly-traded outfit, 40 percent of the firm’s consultant ranks are women, up from just 19 percent 23 years ago. In the U.S. and Canada, women holding the title ‘partner in charge’ at Heidrick can now be found in Atlanta, Los Angeles, Philadelphia and Toronto. In Europe, women claim this distinction in five of 18 offices: Copenhagen, Milan, Lisbon, Stockholm and, of all places, Istanbul; in Asia, the firm’s Shanghai (with Chongqing) and Tokyo offices boast female partners in charge. In all, 12 of 51 Heidrick offices, or 24 percent, are run by women.

Overall, of the 1,870 U.S.-based executive search firms surveyed for this section of the report, 561, or 30 percent, were managed by a woman. That’s slightly higher than the 28.1 percent national average for female run businesses – the human capital business equivalent of baseball’s Mendoza Line; anything below this threshold should be considered incompetent hiring. One of every three of those firms (187) is comprised of at least three or more female consultants; 14 percent (78 firms) are staffed by women only, with no male consultants. What’s behind that number is open to de- bate, though some female recruiters say that for the most part it probably has to do with one’s network connections and cultural fit more than any conscious choice to exclude men. Most significantly, 40 percent of those women-managed firms (224) were formed in the last decade. Now, more than ever, the raw statistics reveal that women are now competing head-to-head with their male counterparts in the human capital management field.

Not surprisingly, the sector specialty that topped the list of female-managed recruiting firms was non-profit. Of the 74 non-profit-oriented search firms surveyed, 35, or 48 percent, are run by women. Given that academia and cultural institutions tend to have more women working in their ranks makes it only natural that women would also recruit in this area. And whereas this sector was viewed as a bit of a backwater 20 years ago when recruiters first identified it as ripening for their services, searching for leaders for universities, museums and cultural institutions, collegiate athletic teams, and hospitals today is important business, where chief executives or their equivalents earn million dollar pay packages. For that reason, it can also be a very lucrative business to specialize in.

Elizabeth Ramos joined non-profit specialist Isaacson, Miller – the 13th largest U.S. search firm with 75 consultants – in 2013 as the firm’s president. Isaacson, Miller under the careful stewardship of its founding chairman, John Isaacson, recruits transformative leaders for education, healthcare, philanthropy, advocacy, and other endeavors that advance the public good. Working closely with him and other members of the firm’s executive committee to set strategy, Ms. Ramos now leads the entire Isaacson, Miller team and directs the management committee in strategy execution and general operations. She has over 25 years of strategy consulting and general management experience at leading professional services firms including Bain & Company, where she eventually served as the firm’s first global chief people officer. Ms. Ramos holds a BA in international economics from DePauw University and an MBA from Harvard Business School. Ms. Ramos and women like her, it seems, have positioned themselves nicely for what has become one of the fastest growing sectors in the recruiting business.

But is positioning oneself in a particular sector that speaks to their strengths enough for women in the 21st century recruitment business? Most women surveyed want more – and a majority of them point to the industry’s largest search firms and are disillusioned when they look at leadership statistics. In scanning Hunt Scanlon Media’s 2014 Top 40 U.S./America’s Search Firms ranking, one finds but five female CEOs: Ms. von Seldeneck at Diversified Search; Ms. Ramos at Isaacson, Miller; Denise DeMan at Bench International; Dale Winston at Battalia Winston; and Connie Adair at Taylor Winfield. A closer look at the power positions at two of the top five global recruiting firms, where one would think diversity reigns supreme, is instead a discouraging glimpse into the inner – and insular – world of old-time executive search.

At Egon Zehnder, just one of the firm’s 19 office locations in the Americas has a female office leader (San Francisco). In Europe, six of 32 offices are run by women (two of those offices, Bratislava and Prague, are run by the same woman; the others are London, Berlin, Frankfurt and Munich). In Asia Pacific, two of 13 offices have women office leaders (Singapore and Sydney). And in the Middle East/Africa region, there is but one female office leader among four offices (Tel Aviv). Collectively, just 15 percent of the firm’s global office leaders are women. But change is coming to Zehnder – Europe’s dominant executive search firm: although just 26 percent of its global consultant workforce is made up of women (putting it just below the human capital ‘Mendoza Line’ and in last place in this year’s ranking), since 2010 43 percent of its consultant hires have been women; in the U.S. that figure grows to more than half, or 53 percent. Today, 23 percent of the firm’s global practice group leaders are women, half of whom lead from London in these sectors: financial services, chief communications officers, financial officers and diversity & inclusion.

At Spencer Stuart, the nation’s No. 2 search firm and No. 3 globally, the picture is bleak and there is no indication of change on the way: female office managers can be found at only one office out of 20 in North America (Washington, D.C.), one out of 20 in Europe, zero out of four offices in South America, zero out of one in Africa, and zero out of one in the Middle East. Only in the firm’s nine Asian offices is there a bright spot found at Spencer Stuart: Beijing, Shanghai and Hong Kong are managed by Hypatia Kingsley; Melbourne and Sydney are managed by Sharon Miles; Singapore is managed by Malini Vaidya; and Mumbai and New Delhi are managed by Anjali Bansal. Only Tokyo is managed by a man. This year Spencer Stuart ranks fourth out of the ‘Big Five’ in the percentage of women among its global consultant workforce.

“There are some terrific women out there – incredible women – and they are all major contributors and have terrific reputations, but they’re not running the firms,” says Ms. von Seldeneck. “I could list a lot of women who I think are phenomenal in this business, but they aren’t driving it.” Four enterprising women who are driving it happen to be, oddly enough, gatekeepers to the most testosterone fueled segment of the headhunting business: boardroom recruiting. They are effectively cracking open the doors to the executive suite and over time, because of their efforts and unique positioning, it is likely that more women will find their names on more shortlists for corporate director positions. The reality has been that the percentage of women on Fortune 500 company boards has been stuck for the past seven years at around 17 percent, according to research compiled by Catalyst. Heidrick & Struggles reports that figure has recently eclipsed the 20 percent mark. Armed with intelligence and drive, this intrepid quartet – two based in New York and two in London – is at the van- guard of a powerful push to unload a big supply of ready and able female directors in the next few years.