Menu
View our Events
Stay Connected:
Women comprised a record 45 percent of board director appointments in Fortune 500 companies, according to Heidrick & Struggles’ newly released 2022 U.S. Board Monitor report. The study, which analyzed Fortune 500 board appointments including representation by gender, race/ethnicity, and experience, also found that Fortune 500 boards had the highest percentage of first-time directors at 43 percent. Let’s dive into the report. 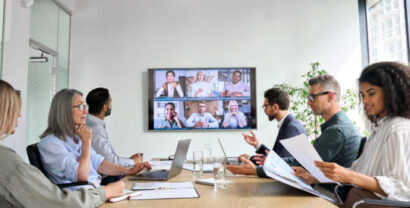 May 11, 2022 – Fortune 500 boards appointed a record share of women and first-time directors in 2021, according to the 2022 Board Monitor report from Heidrick & Struggles. The study, which analyzed Fortune 500 board appointments including representation by gender, race/ethnicity, and experience, found that global events like the pandemic, climate change, increased calls for racial and social justice, and now the war in Ukraine have prompted corporations to focus more attention on organizational purpose. In response, Fortune 500 boards of directors notably shifted to bringing in a wider range of experience, including more directors who are women, diverse, and serving for the first time in the boardroom.

In 2021, 449 board seats were filled with a record percentage of first-time public board directors, at 43 percent, up from 38 percent in 2020, and women directors, at 45 percent, up from 41 percent the previous year. Forty-one percent of directors appointed last year were racially or ethnically diverse, on par with 2020. And, continuing a trend for all directors, a growing share were active (62 percent) rather than retired executives (38 percent).

“The unprecedented events of the past two years have significantly altered the nature of corporations’ license to operate – the fundamental contract is changing between organizations, their stakeholders, and the communities in which they do business,” said Bonnie Gwin, vice chair and co-managing partner of the firm’s global CEO and board of directors practice. “Boards continue to seek fresh thinking as evidenced by the appointment of directors with more diverse backgrounds. And the truly cutting-edge boards are taking a strategic, holistic approach to board succession by continuously monitoring refreshment opportunities to meet today’s challenges and respond with resilience when the unexpected occurs.”

Looking more closely at the racial and ethnic diversity of appointments, Heidrick found that the share of seats filled by black directors held relatively steady at 26 percent, following a sharp rise to 28 percent in 2020. In addition, of all directors sitting on Fortune 500 boards, the share of women climbed steadily, to 29 percent from 19 percent in 2015, as overall board size had not changed much. But both Asian or Asian American and Hispanic or Latinx directors continued to be underrepresented at nine percent and six percent, respectively—percentages that have not risen in recent years.

“We are encouraged to see the trend toward more equitable representation on boards,” said Lyndon Taylor, regional managing partner of Heidrick & Struggles’ North American CEO and board of directors practice. “We expect that more progress will be made on DEI when diverse directors hold more influential board positions, especially as board chair or chair of the nominating and governance committee, but this will require that boards take a comprehensive perspective on diversity from gender to experience to continued pursuit of aspiring directors that are racially and ethnically diverse.”

Notably, Heidrick found that while two-in-five new directors in 2021 were racially and ethnically diverse, a month-by-month analysis of appointments showed that the percentage of diverse appointments peaked in March when 54 percent were diverse, spiked again to 51 percent in May, then dropped substantially in the second half, averaging less than 30 percent. This trend could signal a decline in diverse board appointments – a metric that Heidrick said will be important to monitor in the first and second quarters of 2022.

Since 2018, when Heidrick & Struggles pledged that on an annual basis at least half of the cumulative slate of initial board candidates presented globally to clients would be diverse, the firm has exceeded that goal. In addition, in 2021, 73 percent of the firm’s board placements in the U.S. were diverse.

New appointees continued to broaden boards’ experience in digital, financial risk and compliance, cybersecurity, and sustainability to strengthen resilience given higher levels of uncertainty. Seats going to directors with cybersecurity experience jumped to 17 percent from eight percent in 2020. Those with sustainability backgrounds rose to 14 percent from six percent, and most have had previous international experience.

In a new report, Russell Reynolds Associates examines the steps that countries are taking to encourage or mandate improved gender diversity in the boardroom. Among the countries observed: Japan, the U.S., Hong Kong, Australia, Brazil, and Germany. And in a fresh, new episode of “Talent Talks,” Georgina Pawley, partner EMEA at Beecher Reagan, discusses changes in diversity recruiting caused by COVID-19.

For the sixth years, the average age of new board members continued to hold steady at around 57, with 64 percent of the seats in 2021 going to those 55 and older and only six percent to those under 45.

In addition, Heidrick found that there is still more progress to be made for diverse women. The appointment of Asian or Asian American women and Hispanic or Latinx women lagged considerably, according to the report. Only 31 percent of Hispanic or Latinx appointments and 33 percent of Asian or Asian American appointees were women compared to the higher gender diversity among black (43 percent) and white (49 percent) appointees.

“Boards are looking for new members who can take a leadership role as a chair, senior independent director, or committee leader and are prioritizing nontraditional leadership capabilities,” said Jeff Sanders, vice chair and co-managing partner of the firm’s global CEO and board of directors practice. “Increasingly companies are looking for members who can connect with the organizational purpose and those who understand and can advise when a company should take a stand on social or political issues.”

While no single prescription exists for board composition since each company is unique, Heidrick & Struggles said it is seeing best-in-class Fortune 500 boards generally pursue similar approaches in selecting directors, according to the report: